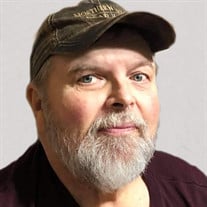 Alan R. Thelander, 63 year old resident of Little Falls, MN, passed away on Saturday, September 11, 2021 at St. Mary’s Hospital in Rochester, MN.  A Funeral Service will be held at 5:00 PM on Friday, September 17, 2021, at Faith Lutheran Church in Little Falls, MN with Rev. Nate Bjorge officiating. Visitation will be from 3 to 5 PM on Friday at the church. A Burial Graveside Service including a dove release will be at the Darling Cemetery Northwest of Little Falls on Saturday at 11:00 AM with visiting and fellowship to follow. Caring for Alan and his family is the Shelley Funeral Chapel in Little Falls, MN. Alan Richard Thelander was born on December 4, 1957 in Little Falls, MN to Richard 'Dick' and Eva (Oslund) Thelander. He was raised on the family dairy farm in Darling Township. He started his elementary education at Dr. S. G. Knight School in Randall and graduated in 1976 from Little Falls High School. He was active in FFA. Alan went to Staples Vo-tech for farm mechanics, graduating in 1979 with classmates who still have reunions every summer! Most of Alan's career was spent trucking, first for Hartwig Trucking and later years for Sonny Peterson Trucking, both in Swanville, MN. Alan bought his home and dairy farm in the late 1980’s. After a few years of farming, he sold the cows, rented out the land and went back to what he loved most, trucking. He drove for Mielke Oil and continued with the company that bought Mielke's until retiring a few years ago. Alan was raised as a Christian, baptized and confirmed at Bethel Lutheran Church in Little Falls and later became a member of Faith Lutheran in Little Falls. While Alan had trucking in his blood, he also loved mechanics, guns, cooking, talking, mystery novels, and his bratty cat, Little Sox!! He was a lifetime bachelor, beloved brother, son, cousin, friend and reliable lovable Uncle to his nieces and nephews. Alan is survived by his father, Dick Thelander of Little Falls, MN; sisters, Dianne (Joe) Staricka of Swanville, MN and Susan Thelander of Allentown, PA; nieces and nephews, Jessica and Eric Staricka, Jordan and Nathan Thelander and Erin Thelander; godparents, Uncle Lyle Thelander of Indiana and Aunt Janette (Oslund) Albaugh of Little Falls, MN. Alan was preceded in death by his mother, Eva Thelander in 1999; brother, David in 2009; siblings, Brian and Linda lost during infancy; grandparents, Eric and Carrie Thelander and Bill and Ann Oslund; step-mother, Annice Thelander.

The family of Alan Thelander created this Life Tributes page to make it easy to share your memories.

Send flowers to the Thelander family.