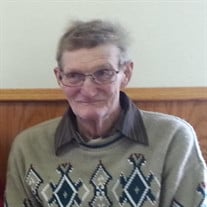 Alfred "Al" Otto Bollin, 90 year old resident of Swanville, MN, passed away Friday, February 4, 2022, at his residence. A Graveside Service will be on Saturday, April 9, 2022, at the East Swanville Cemetery on the outskirts of Swanville, MN, at 1:00 P.M. A Memorial Gathering will follow on April 9, 2022, at the Little Sauk Legion in Little Sauk, MN, at 2:00 P.M. Caring for Al and his family is the Shelley Funeral Chapel of Swanville, MN. Al was born on August 25, 1931, in Randall, Parker Township, MN, in a log cabin to the late Otto and Luevern Bollin. He was the oldest of four children living and farming on the family farm near Randall. In 1950, Al enlisted and served in the Army entering as a Private, leaving as a Corporal, with an honorable discharge from Camp Rucker in Florida. Al served two years during the Korean War. Al and his first wife had seven children together. They divorced in 1964 and parted ways. He then lived and farmed with his seven children in the Randall area. Al married Rose Kjeldergaard on April 6, 1968, at the Little Brown Church in Iowa. Al and Rose had four boys together. Al and Rose milked cows, raised horses, and farmed for many years in the Long Prairie/Browerville area. He also worked off of the farm as a butcher, carpet layer, and as a construction worker until he moved to Little Falls where he returned to farming with four of his youngest children. Al retired from farming while in Little Falls. Al and Rose moved to their retirement home in Grey Eagle. He enjoyed horseback riding, camping, bowling, hunting, planting, maintaining his garden and lawn, feeding and watching birds, and sitting on the porch enjoying the weather. He also got a lot of enjoyment out of sharing his garden produce with others and showing off their flower beds and fish fountain. Al loved tinkering with making small wood projects in his garage. He enjoyed having the grandchildren visiting and showing them his yard. Al's survivors include Sheila Drayna of Canby, JoAnn (Ron) John of Browerville, Jacklyn Denelsbeck of Canby, Dennis Bollin of Grey Eagle, Susan (Mark) Pyburn of Alexandria, Cindy (Mike) Sandgren of Long Prairie, Russell (Patty) Bollin of Long Prairie, Darwin Bollin of Long Prairie, and Dale Bollin of Long Prairie; 44 grandchildren, 76 great-grandchildren, and 1 great-great-grandchild; as well as many old friends, family, and neighbors that will miss him dearly. He was preceded in death by his wife, Rose; parents, Otto and Luevern Bollin; brothers, Melvin, Norman and Gordie Bollin; sons, Phillip and Rodney Bollin; and great-grandson Zathen Seelen.

Alfred "Al" Otto Bollin, 90 year old resident of Swanville, MN, passed away Friday, February 4, 2022, at his residence. A Graveside Service will be on Saturday, April 9, 2022, at the East Swanville Cemetery on the outskirts of Swanville, MN,... View Obituary & Service Information

The family of Alfred "Al" Bollin created this Life Tributes page to make it easy to share your memories.

Send flowers to the Bollin family.