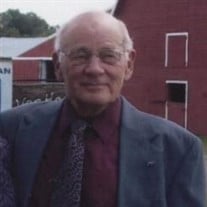 Alvin J. Van Heel, 88 year old resident of Swanville, MN, passed away Monday, March 1, 2021, at his residence. A Mass of Christian Burial will take place at 10:30 A.M. on Saturday, March 6, 2021 at St. John the Baptist Catholic Church in Swanville, MN with Father Ron Dockendorf officiating. Burial will take place in the St. John's Parish Cemetery in Swanville, MN. A visitation will be held from 4-8 P.M. on Friday and from 9-10:30 A.M. on Saturday at St. John the Baptist Church in Swanville, MN. Funeral arrangements for Alvin with the Shelley Funeral Chapel in Swanville. Please follow the COVID-19 mandates with regards to social distancing and wearing of a face covering. Alvin was born on April 17, 1932, in Spring Hill Township to the late Richard and Adeline (Stalboerger) Van Heel. He was united in marriage to Frances Gerads on January 27, 1953. Together they rented a farm in St. Francis, MN until Alvin was drafted into the U.S Army in September of 1953. He served for 2 years in Alabama and Georgia, where Frances joined him after basic training. After his honorable discharge, the couple returned to the farm in St. Francis. In 1958 they bought the family farm near Swanville, MN where they raised their 10 children. In 2016, Alvin retired from farming. In his free time, he enjoyed traveling, riding his ATV, playing cards, and bowling. He and Frances loved spending the winter months in Texas, which they did for many years. His family was most important to him and he cherished the time he spent with them. Alvin was an active member on the township board, director of MidAm Board, American Legion member, and served on the St. John the Baptist Parish Council. He also volunteered at the Swanville Senior Center, ushered at St. John’s Catholic Church, and drove veterans to appointments. Alvin was dearly loved and will be greatly missed. Alvin is survived by loving wife, Frances Van Heel; children, Ronald (Jayne) Van Heel, Diane (Tom Whiting) Schneider, Janet (Thomas) Kruzel, Larry Van Heel, Melvin (Brenda) Van Heel, Kevin (Amanda Hand) Van Heel, Mary (Doug) Mielke, Joyce (Mark) Albertson, John (Lisa) Van Heel, Steven (Melissa) Van Heel; 38 grandchildren and 33 great-grandchildren. Alvin was preceded in death by his parents, Richard and Adeline Van Heel; infant daughter; brother, Ray Van Heel; great-grandson, Bentley Peterson; mother and father-in-law, William and Erma Gerads; stepfather, Joe Koll; brothers-in-law, Clarence Gerads, Raymond Pohlmann, Clarence Wuebkers; sisters-in-law, Betty Gerads, Lillian Van Heel, and many good friends lost along the way.

The family of Alvin J. Van Heel created this Life Tributes page to make it easy to share your memories.