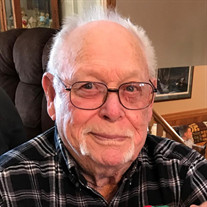 Arthur “Art”, Saulter Jr., 89 year old resident of Little Falls, MN, passed away on Wednesday, August 12, 2020 at St. Otto’s Care Center in Little Falls. Funeral Services will be held at 11:00 A.M. on Monday, August 17, 2020 at the Shelley Funeral Chapel in Little Falls, MN with Rev. Gary Hendrickson officiating. Burial will be at the Minnesota State Veterans Cemetery north of Little Falls, MN. Visitation will be from 9 to 11 AM on Monday at the Shelley Funeral Chapel in Little Falls. Military Rites will be conducted by the Minnesota State Honor Guard. Arthur W Saulter Jr. was born on December 7, 1930 in Little Falls to Arthur and Vernie Saulter. He attended school in Little Falls until the 8th grade. At that time upon the injury of his father he quit school to go to work to help support his family. He entered the US Army in Feb. 1952 and was honorably discharged in Feb. 1954. After serving his country he went to work as a union bricklayer. He was a lifelong mason/bricklayer and belonged to the Bricklayers union for over 50 years. He took great pride in his work and worked on many different county jails throughout a 5 state area and many local buildings including the Morrison county courthouse and all the local school buildings which he was most proud of the large round window that was the last addition on the Lindbergh Elementary school, often commenting on how he did that brick work. Ironically he also had done the brick work on the building that is now called St.Otto’s, which was home for him for the last 2 years. Arthur enjoyed spending time with his family and especially his grandkids. He enjoyed deer hunting and traveled to Alaska for a once in a lifetime moose hunt and was fortunate enough to get a large bull moose which was the 3rd largest moose taken from Alaska at that time. He also enjoyed fishing and wood carving especially carving fish decoys . Up until 2 years ago he enjoyed his weekly Thursday trips up to the deer shack with his lifelong friend Ralph Roubal. Arthur will be greatly missed by all who knew him. Left to cherish his memories are his sons, Randy, Danny and Kandy, Rick and Holly; 7 grandchildren, Kyle, Gabe, Zach (Jillyanne), Abby, Ally (Aaron), Paige (Ben), Trista (Ben); 2 great-grandchildren, Axel Schonning & Remington Nelson. Arthur was preceded in death by his wife, Carol in 2011; sisters, Gail, Charlotte, Yvonne, Margaret, Molly, Joanne and brother, John.

The family of Arthur "Art" Saulter created this Life Tributes page to make it easy to share your memories.

Send flowers to the Saulter family.