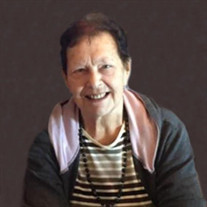 Audrey A. Bednar, 80 year old resident of Pierz, MN passed away Thursday, October 28, 2021 at St. Gabriel’s Hospital in Little Falls. A Mass of Christian Burial will be at 10:30 AM on Saturday, December 11, 2021 at St. Joseph’s Catholic Church in Pierz, MN with Father Kenneth Popp officiating. Burial will be in the Parish Cemetery. Visitation will be from 4 to 7 PM on Friday at the Shelley Funeral Chapel in Pierz and one hour prior to the service on Saturday at the church. Caring for Audrey and her family is the Shelley Funeral Chapel of Pierz, MN. Audrey Ann Tautges was born on February 8, 1941 in Brainerd, MN to the late Adam and Pauline (Martin) Tautges. She graduated from Brainerd High School in 1959. Audrey worked as a waitress at Van's Cafe in Brainerd and then worked at Potlatch Paper Mill in Brainerd. She was united in marriage to Donald Bednar on January 20, 1962 at Saint Mathias Catholic Church. Due to the policy at the paper mill, married women were not allowed to work there, so she was let go. She worked at Herb and Charlie's Genola Bar and Red Rooster Bar as a waitress and bartender. For 15 years she cooked for funerals in Pierz and the last several years she was the head cook. She was well known for her amazing cooking which included, homemade mustard, baked beans, dressing, potato salad and hotdish. Audrey and Don resided in the country on a small farm by Pierz all their married life. She loved playing cards, fishing, gardening and a little bit of gambling. Audrey loved to spend time with her children, grandchildren, and great-grandchildren, which were her most prized possessions. Audrey and Don also enjoyed many road trips to different states with a lot of friends. She took pleasure in the simple things in life. Making and sharing her homemade mustard was a huge pleasure of hers. Audrey is survived by her husband Don, of 59 years; children, Steve (Lisa) of Pierz, Randy (Darlene) of Foley, Larry (Ronda) of Pierz, Amy (Brian) Pettey of Pierz; 14 grandchildren, 23 great-grandchildren; siblings, Billy (Mary) Tautges, Diane Radunz and friend, Gordy Morris, Nipper Tautges and friend, Dale Rekowski, Wally (Linda) Tautges. Audrey was preceded in death by her parents, Adam and Pauline Tautges.

The family of Audrey A. Bednar created this Life Tributes page to make it easy to share your memories.

Send flowers to the Bednar family.