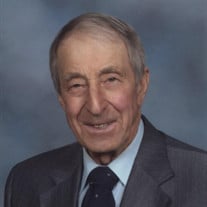 Bernard “Bernie” S. Brisk, 93 year old resident of Pierz, passed away Tuesday, June 15, 2021, at the Pierz Villa. Mass of Christian Burial will be 10:30 AM on Friday, June 18, 2021, at St Joseph’s Catholic Church in Pierz, MN, with Father Kenneth Popp officiating. Visitation will be one hour prior to the service on Friday at the Church. Burial will be in St. Joseph’s Parish Cemetery in Pierz. Military Rites will be conducted by the Pierz American Legion Post #341. Bernie was born on February 17, 1928, in Harding, Minnesota, to the late Mike and Rosie (Matlock) Brisk. He grew up on a busy dairy farm milking cows and raising pigs, where he was the fifth of nine children. On May 17, 1945 he graduated from Little Falls High School, and during his years after high school, he worked with his brother Ray on logging jobs in the area. In December 1950 he was drafted into the army and served through November 1952, during the Korean War and was stationed in Japan. After serving in the army reserve for the next four years, he was discharged on December 6, 1956, with a rank of corporal at that time. He attended Dunwoody Institute in the next few years furthering his engineering degree and in between his studies would work for his brothers and most notably performed the surveying for a railroad job in Pollock, South Dakota. He was hired on by the State of Minnesota as a road and building inspector and after 10 years had worked his way up to becoming an engineer, running many road and bridge projects until his retirement in 1985, having worked for the State of Minnesota for 30 years. After moving into the Pierz area, Bernie was the Belle Prairie Township road engineer for a number of years until he moved to St. Joseph. When he was younger, he and his brothers often would go to many of the local ballrooms to dance and that is where he met Marian Wensmann who he would choose to be his permanent dance partner and they married on April 23, 1960. Throughout his married life, he and Marian lived in a number of different homes (some of which Bernie personally designed) in Winona, Rochester, Crookston, the farmhouse on County Road 46 by Pierz, St. Joseph and finally, building his house in the town of Pierz. Bernie had a strong faith and was a very devoted and loving husband. He and Marian enjoyed spending time together square dancing with the “Lindy Squares” or playing cards on the weekends with family and friends. He did not usually endorse watching television other than the local news but on occasion might be caught watching reruns of “The Lawrence Welk Show” or “The Andy Griffith Show” after a long day of work and sipping on some of their homemade wine. The majority of his later years after he “retired” in 1985, he enjoyed working in the fields on his farm or projects in his yard and he and Marian were named Morrison County Conservationists of the Year in 1995. Bernie is survived by his brother, Virgil (Babe), sisters-in-law, Bertha, Irene and Diane, and many nieces and nephews. Bernie was preceded in death by his wife, Marian; parents, Mike and Rosie; siblings, Lucille, Archie, Edmund, Amelia (George), Rhinehart “Butch” (Donna), Ray, Richard and his nephew, Terry. We would like to thank the caring and compassionate team at Pierz Villa for the wonderful care they provided Bernie over the past three-plus years.

The family of Bernard "Bernie" S. Brisk created this Life Tributes page to make it easy to share your memories.

Send flowers to the Brisk family.