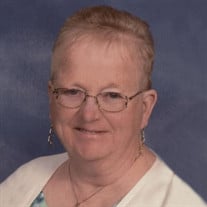 Bev Johnson, 71 year old resident of Upsala, MN passed away Wednesday, November 10, 2021 at her home. A funeral service will be held at 11:00 A.M. on Saturday, November 13, 2021 at Gethsemane Lutheran Church in Upsala with Mavis Buker officiating. Burial will take place in the Gethsemane Lutheran Cemetery in Upsala, MN. A visitation will be held from 4-8 P.M. on Friday and from 10-11 A.M. on Saturday at Gethsemane Lutheran Church in Upsala, MN. Caring for Bev and her family is the Shelley Funeral Chapel in Little Falls, MN. Beverly Ethel (Thompson) Johnson was born on May 11, 1950 in Little Falls, MN to the late Russell and Virginia Thompson. Bev grew up in the Upsala area on her family farm. She was confirmed at Gethsemane Lutheran Church in 1964, where she was a lifetime member. Bev attended and graduated from Upsala Area Schools, graduating with the Class of 1968. In 1964, she met the love of her life Roland "Rollie" Johnson, she moved to Minneapolis in the fall of 1968 to be closer to Rollie and worked at Super America until 1972. They married June 7, 1969, at Gethsemane Lutheran Church in Upsala, MN. In 1972, they purchased Albert Petersons place and moved back to Upsala. Bev was a stay at home mom and farm wife, as her and Rollie raised hogs. In 1976, they purchased Bev’s family farm from her parents, Russell and Virginia Thompson. They raised cattle and milked until 1979 and then they raised and sold Pure Bred Chester White and Purebred Hampshire hogs. In 1988, they sold the farm and moved into Upsala. After her kids graduated from high school, Bev worked for Albany Home Bakery, Goody Snack Vending in St. Cloud, Index 53 in St. Stephen and then West Side Liquor as office manager for 7 years and retiring, in 2014. Bev had a heart of gold. She taught religious release time for many years at Gethsemane, helped with VBS and all the kids adored and loved her, she was a member of the Upsala American Legion Auxiliary and was financial secretary at Gethsemane with Rollie for 30 years. Bev's biggest highlight was all the trips her and Rollie took with their grandkids especially the ones to Duluth. She was also one of the biggest fans at her grandkids' sports and dance activities. She was always Rollie's biggest supporter in everything he did and with his diabetes. Her family meant the world to her. In 2001, Rollie and Bev built a patio home right on the outskirts of Upsala city limits and resided there until the time of her death. Bev's strong Christian faith played a tremendous role in her life. Bev is survived by her husband of 52 years Rollie; daughter, Dawn Janssen (Joe Trettel) and son, Rollie (Joan) Johnson Jr. of Upsala, MN; 5 grandchildren, Russell Janssen of Fargo, ND, Kailee Janssen, Logan Janssen, Riley Johnson and Carter Johnson, all of Upsala, MN; brother, Wes Thompson of Sartell, MN; in-laws, Harvey (Judy) Johnson, Joyce Johnson, Bruce (Lynn) Johnson of Swanville, MN, Linda (Bob) Feuling of Rice, MN and Kenny (Julie) Johnson of Breckenridge, MN; god-children, Rick Feuling and Danielle Johnson and many other nieces, nephews, family and friends. Bev was preceded in death by her parents, Russell and Virginia Thompson; stepfather, Edmund Nelson; grandparents, Widrick and Anna Thompson and Otto and Ethel Johnson; nephew, baby boy Thompson; father and mother-in-law, Leonard and Donna Johnson and brother-in-law Duane Johnson.

Bev Johnson, 71 year old resident of Upsala, MN passed away Wednesday, November 10, 2021 at her home. A funeral service will be held at 11:00 A.M. on Saturday, November 13, 2021 at Gethsemane Lutheran Church in Upsala with Mavis Buker officiating.... View Obituary & Service Information

The family of Bev Johnson created this Life Tributes page to make it easy to share your memories.

Send flowers to the Johnson family.