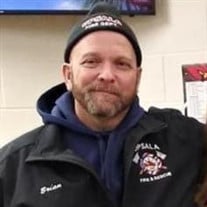 Brian D. Lange, 55 year old resident of Upsala, MN passed away Saturday, December 11, 2021 at St. Gabriel’s Hospital in Little Falls, MN. A Mass of Christian Burial will be 10:30 AM on Saturday, December 18, 2021, at St. Mary’s Catholic Church in Upsala, MN with Father David Grundman officiating. Burial will be in the Parish Cemetery. Visitation will be from 4 to 7 PM on Friday and from 9:30 to 10:30 AM on Saturday all at St. Mary’s Catholic Church in Upsala, MN. Caring for Brian and his family is the Shelley Funeral Chapel of Little Falls, MN. Brian David Lange was born on September 26, 1966 to Ralph & Audrey (Stenholm) Lange at North Memorial Hospital, Robbinsdale, MN. He attended school in Upsala where he graduated Valedictorian of the class of 1985. After high school, Brian attended St. Cloud State University majoring in Computer Programming. During that same time, he started a job at Stearns Bank Upsala. In the 14 years at this job he was a teller, loan officer and eventually the bank manager. On May 30, 1998, Brian was united in marriage to Elizabeth (Beth) Heim. In September 2001 Brian started his job at Woodcraft Industries making cabinet doors. He enjoyed making things with his hands. Together Brian and Beth help raise his niece, Brianna Lange. In January 2004 the union was blessed with a daughter, Jessica. Brian served his community for over 10 years on the city council. He also was a past member of the Upsala First Response, where he played a role in obtaining the rig still currently used. Brian was also an active member of the Upsala Fire Department, serving as a Captain for the past 6 years. A member of St. Mary's Church in Upsala, over the years he gave of his time on the parish council, as a lector, Eucharistic Minister and choir member. Left to cherish his memory is his wife of 23 years, Beth; daughter, Jessica (at home); niece/daughter, Brianna (Cooper Scott) of Willmar; brother, Greg; granddaughter, Arya of Willmar. He was preceded in death by his parents, Ralph & Audrey; infant brothers, Ricky & Gerald; infant sister, Jessica; several aunts & uncles. The family would like to thank the staff in the ICU at St. Gabriel's Hospital in Little Falls for their loving care of Brian during his hospitalization up to the day that he left us too soon.

To join in on Brian's livestream, click the following link: https://my.gather.app/remember/brian-lange

Send flowers to the Lange family.