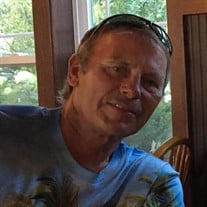 Bruce A. Pederson, 66 year old resident of Little Falls, MN passed away Tuesday, June 15, 2021 at the Little Falls Care Center in Little Falls, MN. A funeral service will be held at 11:00 A.M. on Tuesday, June 22, 2021 at the Shelley Funeral Chapel in Little Falls, MN with Rev. Beth Pottratz officiating. Burial will take place in the Minnesota State Veterans Cemetery in Little Falls, MN. A visitation will be held from 4-7 P.M. on Monday and from 10-11 A.M. on Tuesday at the Shelley Funeral Chapel in Little Falls, MN. Memorials are preferred to DAV Morrison County Chapter 12 or CHI St Gabriel’s Hospice. Caring for Bruce and his family is the Shelley Funeral Chapel in Little Falls, MN. Bruce Alan Pederson was born May 14, 1955, in Warren, Minnesota, the son of Herbert and Anna (Peterson) Pederson. Bruce married Deborah Dobis on December 2, 1989. Bruce spent his early childhood in Williston, North Dakota where he was a member of the AAU Competitive Swim Team, which led to his lifelong passion for the water. The family relocated to Little Falls in 1970. Bruce was a graduate with the Class of 1973 from Little Falls High School. Bruce continued his studies at Willmar Vo-Tech receiving a degree in Mobile Communications. He began his career in 1980 with the State of Minnesota as a Radio Technician for the Department of Transportation, later transferring to the Department of Military Affairs where he served as the Electronics Supervisor. After 35 years, Bruce retired from the State in 2015. He went on to work as a custodial technician at the VA in St Cloud, substitute rural mail carrier for the USPS in Little Falls and resort groundskeeper at Madden’s on Gull Lake. Bruce enlisted in the Minnesota Army National Guard on April 30, 1974, honorably serving for 35 years with deployments to Bosnia in 2003 as a part of SFOR XIV and to Iraq with Operation Iraqi Freedom between October 2005 and July 2007. After proudly serving his country and obtaining the rank of Master Sergeant, Bruce retired in 2009. His dedication to Veterans shined through his post-service activities. Bruce was a life member of VFW Post 1112, where he served as Adjutant, DAV Chapter 12 Morrison County serving as Treasurer, 3rd Senior Vice Commander for DAV Department of Minnesota, a member of the VFW Post 1112 Memorial Rifle Squad Honor Guard, and a member of American Legion Post 46. In his spare time, Bruce enjoyed being at the cabin on Lake Alexander, ice fishing, spending time with family and friends, and volunteering for VFW and DAV functions. Surviving Bruce is his wife of 31 years, Deb; daughters, Katie (Marc) Box of Belmont ME and Anna (Adam Davis) Pederson of Inverness, IL; grandchildren, Lizzie, Michael and Annie Box, mother, Anna Pederson of Little Falls; siblings, Brad (Birdie) Pederson of Flensburg, Barb Pederson of St Louis Park, and Mary (Tony) Rebnord of Farmington; sister-in-law, Mary Jo Retka of Fort Ripley; and many nieces and nephews. Bruce was preceded in death by his father, Herb Pederson; brothers, Bryan and Brent Pederson; and father and mother-in-law, Ray and Victoria Dobis.

The family of Bruce A. Pederson created this Life Tributes page to make it easy to share your memories.

Send flowers to the Pederson family.