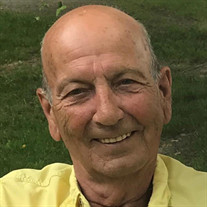 Calvin R. Smieja, 72 year old resident of Royalton, MN passed away Monday, November 9, 2020 in Royalton, MN. The memorial service for Calvin will be postponed until further notice. Funeral arrangements are with the Shelley Funeral Chapel in Little Falls, MN. Calvin Roman Smieja was born on April 8, 1948 in Little Falls, MN to the late Roman and Ermalinda Smieja. Cal grew up in Royalton and graduated from Royalton High School. After graduation, he sailed the Great Lakes on an ore boat. Then he was drafted into the United States Army and served in Germany. He married Susan Herold in 1973 and they raised four sons. Cal worked as a cement finisher until 1983 when they purchased Royal Oil, a gas and bait shop in Royalton. After the sale of Royal Oil in 1998, Cal retired, became a handyman, and finished many projects until his death. He was a member of the Royalton Gun Club (Kitchi Lake) and Royalton American Legion. Cal loved fishing Kitchi Lake, deer hunting Horseshoe Island, pontooning on the Mississippi River, and spending time at Hapacasu cabin. Cal was a “Jack of all trades”. He repaired many cars, remodeled his kid’s homes, and worked on many projects in his garage. Cal had a big heart when it came to helping others and never expected anything in return. He also loved spending time with his 11 grandchildren. Cal will be greatly missed by his family and friends. Cal is survived by his wife, Susan; sons, Nathan (Leyla), Wade (Melissa), Adam (Katie), and Isaac (Erin). He is also survived by his grandchildren, Khalil, Mateis, Niya, Ajay, Ian, Wyatt, Jackson, Addison, Josephine, Ariana, and Beckett; sisters, Donna Mae Smieja and Marcia (Michael) Blum; and many nieces and nephews. He was preceded in death by his parents, Roman and Ermalinda (Kranz) Smieja, and his infant brother Duane.

Calvin R. Smieja, 72 year old resident of Royalton, MN passed away Monday, November 9, 2020 in Royalton, MN. The memorial service for Calvin will be postponed until further notice. Funeral arrangements are with the Shelley Funeral Chapel in... View Obituary & Service Information

The family of Calvin R. Smieja created this Life Tributes page to make it easy to share your memories.

Send flowers to the Smieja family.