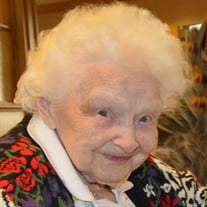 Carla Eleanor Miller, 105-year-old resident of Onamia, MN passed away on February 9, 2021, at the Mille Lacs Health System in Onamia. Private interment will be at the Fairview Cemetery in Oakland, Minnesota at a later date. Arrangements are with the Shelley Funeral Chapel of Onamia. Carla Miller was born on October 31, 1915, to Richard J and Mina E (McDonald) Peterson in Belmond, Iowa. Her family moved to Oakland, Minnesota in 1921 where she grew up. She graduated from Austin High School in 1932. After graduating from Mankato State University in 1935, she taught in a Mankato State-affiliated school, until her marriage in 1937 to Oscar Miller. "OsCarla" lived in Heron Lake, Lyle, Zumbrota, Morris, and Onamia. Oscar served as Superintendent of Schools, and Carla was a homemaker for 13 years until their three children were all in school. She attended night classes and summer sessions at the University of Minnesota, earning her BA degree in 1960. She graduated with high distinction, with a major in English and a minor in Speech. She taught English and Speech at Cyrus, Chokio, Isle, and Onamia, Minnesota. She had many students who were winners in speech and essay contests. She dearly loved teaching and her pupils, and over the years she enjoyed the appreciation expressed by many students. Throughout her life, Carla was active in the churches to which she belonged. She taught Sunday School for many years, sang in church choirs, painted the addition at Bethany Lutheran, and served in various women's organizations. Carla and Oscar enjoyed 16 years of retirement together. Their favorite hobby was traveling, and they enjoyed trips to Australia, New Zealand, Europe, Tahiti, Alaska, Fiji, Mexico, and Canada. They made it a special goal to visit all fifty states, and succeeded. They also loved theater, concerts, musicals, reading, square dancing, and playing bridge and other card games. After Oscar's death in 1991, Carla continued to live in her home in Onamia. She spent much of her time with her children, grandchildren, great-grandchildren, sisters, and many good friends. In 2010 she moved to Lake Song Assisted Living, and in 2014 she transferred to MLHS Long Term Care, where she resided until her death. Carla will be remembered for being a loving and supportive wife, mother, grandmother, and sister. She was a successful teacher, and we often heard from her students how much they loved her. She had amazing energy all her life. She touched hundreds of lives with her care and support. Carla is survived by her three children, six grandchildren, six great-grandchildren, one sister, and several nieces and nephews. Carla was preceded in death by her husband, Oscar Miller, and three sisters.

Carla Eleanor Miller, 105-year-old resident of Onamia, MN passed away on February 9, 2021, at the Mille Lacs Health System in Onamia. Private interment will be at the Fairview Cemetery in Oakland, Minnesota at a later date. Arrangements are... View Obituary & Service Information

The family of Carla Eleanor Miller created this Life Tributes page to make it easy to share your memories.