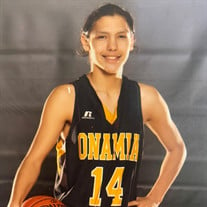 ** To Order Flowers Please Call (320) 532-4132 ** Miskwaanakwad, Cayden Eagle, 17-year-old resident of Isle, MN passed away on September 2, 2021. A funeral Ceremony will be held at 10 AM on Monday, September 6, 2021, at the District 1 Community Center on the Mille Lacs Reservation. Visitation will begin at 7 PM on Sunday, September 5, 2021, at the District 1 Community Center on the Mille Lacs Reservation. Interment will be in the Vineland Burial Grounds. Arrangements are with the Shelley Funeral Chapel of Onamia. Miskwaanakwad, Cayden Michael Lee Eagle was born on May 20, 2004, in Onamia, Minnesota, to Erikkah Skog and Michael Eagle. He was an exceptional student at Onamia High School, where he participated in basketball, baseball, and football. Cayden was passionate about his Native American culture and language. He loved being with his brother, sisters, and friends, where they would spend their time listening to music, gaming, and driving around in his car. Cayden was proud of his first car, a 1989 Chevy Celebrity that he worked for and bought on his own. He will be greatly missed by all. Cayden is survived by his mother, Erikkah (Pete Braith) Skog; father, Michael Eagle; brother, Carson Braith; sisters, Amanda Eagle and Reyale Sam; grandparents, Maurice, Laurie Rogerson, Rosella Eagle, Kenneth Shingobe, Roger and Viv Braith; and many loving relatives and friends. He was preceded in death by his grandparents, Melvin & Delores Eagle, Nancy Schaaf, and Kim Braith.