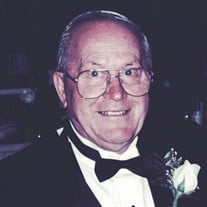 Donald E. Nelson Sr., 93 year old resident of Brooklyn Park, MN, formerly of Brooklyn Center, MN, passed away Sunday, March 27, 2022, at Maranatha Senior Living in Brooklyn Center, MN. A Mass of Christian Burial will be at 3:00 PM on Friday, April 1, 2022 at St. Alphonsus Catholic Church in Brooklyn Center, MN with Father John Schmidt officiating. Burial will be at the Minnesota State Veterans Cemetery north of Little Falls, MN. Visitation will be from 1 to 3 PM prior to the service on Friday at the church. Caring for Donald and his family is the Shelley Funeral Chapel of Little Falls, MN. Don was born on November 29, 1928 in Delano, MN to the late Wilmer & Elizabeth (Esser) Nelson. He grew up and attended school in St. Cloud, MN. He enlisted in the US Navy in 1948 to 1950, serving on the USS Guadalupe in the Philippines. He was united in marriage to Luverne A. Kociemba on November 9, 1950 at St. Anthony’s Catholic Church in Saint Cloud, MN. They lived most of their life in Brooklyn Center, MN. Don worked as a foreman for Hoffer Glass Company in Minneapolis. After retirement, Don & Luverne enjoyed traveling visiting many states and countries. As a couple, they enjoyed many cruises together. They eventually purchased a home in Fort Myers, Florida. Don enjoyed fishing, bowling, golfing, occasionally playing his button accordion, spending time with family and friends. He enjoyed tinkering with things and could fix just about anything. Don is survived by his wife of 71 years, Luverne Nelson; sons, Steve and Candice Nelson of East Bethel, MN, Duane Nelson of Waukesha, WI, Don Jr. and Patti Nelson of Elk River, MN, Terry and Jodi Nelson of Little Falls, MN; daughter, Lori and Chad Charboneau of Brooklyn Park, MN; 15 grandchildren; 16 great-grandchildren and 1 great-great-grandchild. Don was preceded in death by his parents; siblings Robert, Floyd, Kenneth, Dorothy; and his daughter-in-law, Judy Nelson.

The family of Donald "Don" E. Nelson created this Life Tributes page to make it easy to share your memories.