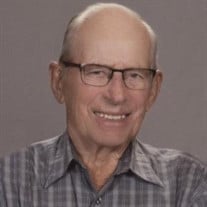 Donald J. Maciej, 87 year old resident of Elmdale, MN, passed away on Tuesday, August 17, 2021 at his residence. A Mass of Christian Burial will be held at 11 AM on Monday, August 23, 2021 at St. Edwards Catholic Church in Elmdale, MN, with Fr. David Grundman officiating. Burial will be at St. Edwards parish cemetery. Visitation will be from 4 to 7 PM on Sunday and 10 to 11 AM on Monday, both at St. Edwards Church. Parish prayers will be prayed at 4:00 PM. Military Honors will be provided by the Bowlus American Legion Post #642. Caring for Donald and his family is the Shelley Funeral Chapel of Little Falls, MN. Donald James Maciej was born on June 11, 1934 in Bowlus, MN to the late Leo, Sr. and Jennie (Sobiech) Maciej. He graduated from Little Falls High School and entered into service with the U.S. Army in 1954, serving overseas during the Korean Conflict. Donald was honorably discharged on November 22, 1955. He was united in marriage to Jeanette Jendro on November 25, 1958 at St. Edwards Catholic Church in Elmdale. Together they farmed on the family farm in Elmdale and raised their family. Donald farmed his entire life and was self-reliant in fixing his own machinery as well as making wood to heat his home. He cherished his time spent with his family and was known to blow on a harmonica now and then. Donald was active at his church and active in St. Edwards Choir. He was on the Elmdale Creamery Board and was also a member of CBI (Creamery Blending). Donald served as commander of the Bowlus American Legion Post #642. Donald is survived by his wife, Jeanette; sons, Duane (Teri) of Somerset, WI and Pat (Ann) of Holdingford, MN; daughter, Carol (Dan) Weber of Cold Spring, MN; grandsons, Zac of Swanville, MN, Adam (Sara) of Sartell, MN, Alex and friend Katie of Duluth, MN, Chaz Walls of Somerset, WI, and Miles Walls of Somerset; great-grandchildren, Ethan Walls, Madison Walls, and Landon Maciej; brothers, Alvin and friend, Doreen of Coon Rapids, MN, Harvey (Mary) of Wrenshall, MN, Jim (Ann Marie) of Annandale, MN, and Dennis and friend, Kathy of Elko, MN; sisters-in-law, Odele Maciej of Rice, MN, Collette Maciej of Zimmerman, MN, Jeanne Maciej of Austin, TX, and Chris Maciej of Elk River, MN. He was preceded in death by his parents, Leo, Sr. and Jennie Maciej; and brothers, Ernie, Kenny, Bob, Lester, and Leo, Jr. (Antone) Maciej.

Donald J. Maciej, 87 year old resident of Elmdale, MN, passed away on Tuesday, August 17, 2021 at his residence. A Mass of Christian Burial will be held at 11 AM on Monday, August 23, 2021 at St. Edwards Catholic Church in Elmdale, MN, with... View Obituary & Service Information

The family of Donald J. Maciej created this Life Tributes page to make it easy to share your memories.

Send flowers to the Maciej family.