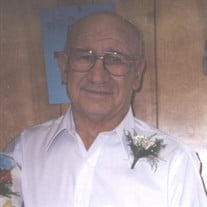 Donald J. “Pete” Murphy, 86 year old resident of Pierz, MN, formerly of Ramey, MN, passed away Tuesday, December 7, 2021, at his residence surrounded by his family. A Memorial Mass of Christian Burial will be at 11:30 AM on Wednesday, December 15, 2021 at St. Joseph’s Catholic Church in Pierz, MN with Father Kenneth Popp officiating. Burial will be at a later date. Visitation will be one hour prior to the service on Wednesday at the church. Caring for Donald and his family is the Shelley Funeral Chapel of Pierz, MN. Donald James “Pete” Murphy was born on April 27, 1935 in North Branch, MN to the late John and Cecelia (Zimmer) Murphy. He was united in marriage to Betty Kantor on September 2, 1963, at St. Elizabeth Catholic Church in Brennyville, MN. They lived most of their life in Ramey, MN, where they farmed and raised their 3 children, Raymond, Rosie and Richard. After retirement, he worked for local farmers and Bill’s Lawn Service. His last job was Bill’s Ace Sod Farm in Howard Lake. Pete is survived by his wife of 58 years, Betty Murphy; sister, Catherine Howenton; children, Rosie Weber and Richard Murphy and 8 grandchildren. Pete was preceded in death by his parents, John and Cecelia Murphy; his 1st born son, Raymond Murphy; 5 brothers and 1 sister.

The family of Donald "Pete" J. Murphy created this Life Tributes page to make it easy to share your memories.

Send flowers to the Murphy family.