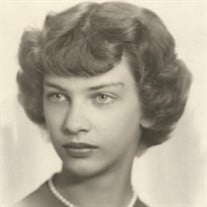 Dorothy J. Koopmann, 79 year old resident of Little Falls, MN, passed away on Thursday, July 29, 2021 at Central Minnesota Senior Care in Little Falls. A Funeral Service will be held at 1 PM on Thursday, August 5, 2021 at Shelley Funeral Chapel in Little Falls with a visitation one hour prior to the service. Interment will be at the Minnesota State Veterans Cemetery north of Little Falls. To join in on Dorothy's funeral via livestream, please click the following link: https://my.gather.app/remember/dorothy-koopmann Dorothy was born November 30, 1941 to Claudia and Gilbert Raschke and was the second of three siblings. She was raised in St. Paul, MN and graduated from Johnson High School in 1959. In her early adult life, she worked as a stenographer for the Minnesota Department of Conservation, where she met husband-to-be, Lester J. Koopmann (1926-2016) who she married in September of 1963 and with whom she would raise two sons, John (born in 1967) and Karl (born in 1975). Leaving St. Paul in the mid-1960s, Dorothy and Lester would establish homes in Spring Lake Park, Detroit Lakes, and then Moorhead, before settling in Little Falls. From an early age, Dorothy was deeply involved in the performing arts, from dance to theater to singing, but especially in instrumental music, on which she was ultimately to build her professional career. While many who knew her well will recall her spontaneously breaking into song, Dorothy's strongest passion was playing the piano and organ, which became the centerpiece of her life's work. This passion later led to the pursuit of a music degree at Concordia College (Moorhead, MN) where she graduated in 1985 with highest honors. The highlights of her career were her posts as organist at several churches over the years, most recently, St. Peter's Lutheran in Randall, MN. She was also very active as a piano accompanist in a wide variety of settings, including with community, school, and church choirs across the state; stage/theater productions; and with vocal and instrumental soloists. She devoted much of her life to the mastery of this craft and to bringing her musical best to every service and function. Another significant facet of her career was that of educator, teaching private music lessons to countless students throughout her life. In addition to all her musical endeavors, Dorothy was also a devoted wife and mother. In her spare time, she was an avid gardener, loved the outdoors, cared for her dogs, and enjoyed crafts, including needlework and canning preserves from wild fruits. She will be remembered for the joy she brought to those around her by her infectious youthful spirit, her generosity, reverence, and devout Christian faith. Dorothy is survived by her brother, Paul Raschke; sons, John and his wife, Cindy, and Karl and his partner, Jennifer Foote-Thomas; granddaughters, Sarah Adair and her husband Dylan, and Anna Koopmann; and great-granddaughter, Rebel Jane Adair. Dorothy was preceded in death by her husband, parents and brother, Gerald Raschke.

The family of Dorothy J. Koopmann created this Life Tributes page to make it easy to share your memories.

Send flowers to the Koopmann family.