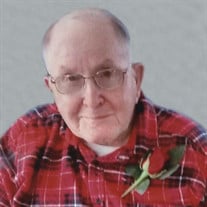 Edward L. Jendro, 92 year old resident of Elmdale, MN passed away peacefully, Monday, November 30, 2020 at the St. Cloud VA. Mass of Christian Burial will be held at 11:00 A.M. on Monday, December 7, 2020 at St. Edward’s Catholic Church in Elmdale, MN with Father Albert Holmes officiating and Father David Grundman concelebrating. Burial will take place at St. Edward’s Parish Cemetery. Visitation will be held from 4-7 P.M. on Sunday at the Shelley Funeral Chapel in Little Falls and from 10-11 A.M. on Monday at the church. Parish Prayers will be at 7 PM Sunday evening. Military Rites will be conducted by the Bowlus American Legion. Edward (Eddie) Jendro was born October 8, 1928, in Elmdale, Minnesota to the late Frank and Barbara (Wagner) Jendro. Edward was a lifelong member of St. Edward's Church in Elmdale, receiving all his sacraments there. He was also a long time member of the American Legion in Bowlus. He enlisted in the Army, serving from November, 1948 to November, 1951 as a Medic. After being honorably discharged as Sergeant, he bought a farm near Elmdale where he lived his whole life. He was united in marriage to DeLoris Motzko on November 11, 1958, and together they raised their 5 children. He was a hard-working farmer and construction worker who enjoyed the outdoors and the animals around him, whether it was cows, deer, dogs, cats or squirrels, he got joy out of watching them and the way they would play. Edward was a quiet soul with a giving heart and would help anyone who needed it. He was a wonderful father and grandfather. He will be greatly missed by everyone who knew him. Eddie is survived by his children, Cheryl Burnett (Bryan Peterson), Connie (Dave) Gastecki, Cathy (Dave) Jacobs; son, Jim (Monica) Jendro and Nancy (Kary) Mollner; 19 grandchildren and 13 great-grandchildren; brother, Richard (Joan) Jendro; sisters, Dolores Czech, Jeanette (Donnie) Maciej, Ione (Bob) Brezinka; sisters-in-law, Joan Jendro (Raymond) and Judy Polasek (Jerry). Eddie is preceded in death by his wife DeLoris; parents, Frank and Barbara; brothers, Raymond and Gerald (Jerry); father and mother -in-law, George and Clara Motzko, brothers and sisters-in-law, John Motzko, Estella Grabowski, Lloyd and Gerry Motzko, Frank and Marjorie Motzko and Roman Czech. A special thank you to the St. Cloud VA 51-1 and 50-1 nurses and staff for all their loving care and support during Dad's stay with them, always treating him with respect and dignity, we will be forever grateful.

The family of Edward "Eddie" L. Jendro created this Life Tributes page to make it easy to share your memories.

Send flowers to the Jendro family.