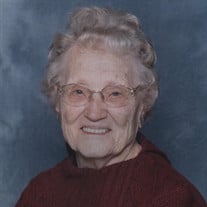 Ellen Domine, 99 year old resident of Little Falls, formerly of LaMoure ND and Harlingen TX, passed away November 2, 2020 at the Little Falls Care Center. Graveside services will be held in the spring of 2021 in LaMoure, North Dakota. Ellen was born February 11, 1921 in Cayuga, North Dakota to the late Leonard and Ida (Freeman) Kotchian. She attended Valley City North Dakota State Teachers College and taught school in Rutland and Geneseo North Dakota for three years. She was united in marriage to Fred Domine on June 20, 1946 and they moved to LaMoure where Fred and his brother Bill owned & operated Domine Brothers Blacksmith Shop. Ellen worked as Deputy County Superintendent of Schools for LaMoure County until the birth of her daughter. Over the following years, she held office positions at the LaMoure Farmer’s Union, the grain elevator, and the hospital, and returned to the County Superintendent’s office until her retirement. In 1976 the couple retired to Harlingen, Texas. Following the death of her husband in 1986, Ellen remained in her Texas home another ten years before moving to Little Falls to be near her family. Ellen was a member of Zion Lutheran Church and spent many hours volunteering at church, Kinship, and as a school mentor. Ellen is survived by her daughter, Mrs. Robert (Donella) O’Neill, grandson, Jeffery O’Neill; granddaughter, Mrs. James (Jennifer) Schultz and one great-granddaughter, Ripley Schultz. Ellen was preceded in death by her husband; Fred; parents, Leonard and Ida Kotchian; and two brothers, Ray and Glenn Kotchian.

The family of Ellen Domine created this Life Tributes page to make it easy to share your memories.

Send flowers to the Domine family.