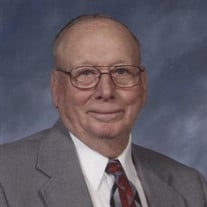 Eugene "Gene" Nelson, 102 year old resident of Little Falls, MN passed away Friday, March 25, 2022 at the Little Falls Care Center in Little Falls, MN. A funeral service will be held at 2:00 P.M. on Saturday, April 2, 2022 at the Shelley Funeral Chapel in Little Falls, MN with Rev. Tony Romaine officiating. Burial will take place in the Hope Cemetery in Eagle Bend, MN. A visitation will be held from 1:00-2:00 P.M. on Saturday at the Shelley Funeral Chapel in Little Falls, MN. Caring for Gene and his family is the Shelley Funeral Chapel in Little Falls, MN. In Lieu of Flowers, Family prefers memorials be made to the American Cancer Society. Eugene (Gene) Arthur Nelson was born on November 9, 1919, in Eastern Township, Otter Tail County, Minnesota to the late Arthur William Nelson & Stella Elizabeth (Miller) Nelson. He grew up near Eagle Bend, Minnesota and attended District #172 Country School. After completing his schooling, Gene worked for his father and neighbors farming and cutting wood. Then he worked for Otter Tail County for four years taking care of the country roads. Gene entered the U. S Army in Feb. 1942 and served in the European Theatre during WWII. He was a Staff Sargent Squad leader and was one of the first troops involved in the Normandy Invasion landing on Omaha Beach. Of the 200 men in the group, only 30 survived after the first couple of hours. Gene was part of Patton’s Army group going through France until he was wounded. He convalesced in England and then taught scouting until his honorable discharge on October 12, 1945. Gene was united in marriage to June V. Taylor on May 18, 1946 in Eastern Lutheran Church in Parker’s Prairie, Minn. The couple lived in Eagle Bend, MN where Gene worked as a salesman for the International Harvester dealer until relocating to Little Falls in 1953. Gene worked for the Milt Johnson Pontiac car dealership for a year and a half. On January 1, 1955 he began working for Standard Parts (NAPA) until retiring after 28 years in 1983. Gene enjoyed traveling, square dancing and ballroom dancing in his free time. He was a member of the First United Church of Little Falls, Masonic Lodge Chapter 10 of St. Cloud, MN, Zurah Temple A.A.O.N.M.S of Minneapolis, MN. Gene was also a lifetime member of the Little Falls American Legion Post #46, D.A.V and the Randall VFW Post #9073. He was dearly loved and will be greatly missed. Gene is survived by daughter, Virginia (Richard) Klitsch of Bloomington, MN; grandson, Mark Klitsch of Coon Rapids, MN; great-granddaughter, Julie Lynn Klitsch and great-great-grandson, Kaiden Michael Terrell. Gene was preceded in death by wife, June Nelson on February 27, 1990; parents, Arthur and Stella Nelson; and brother, Donald P. Nelson.