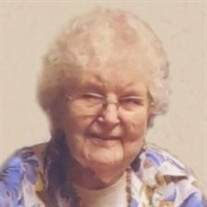 Evelyn Idabelle Ahlbom was born to John and Hilma (Bovie) Ahlbom on September 19,1922. She passed away peacefully at home on November 15, 2020 at the age of 98. Evelyn’s son Tom had been her full-time caregiver for the past several years, which made it possible for her to remain in her own home. There will be a private memorial service at a later date. Arrangements are with Shelley Funeral Chapel in Little Falls. Evelyn married Rush Ledbetter on May 1, 1942 at Ft. Riley, KS. She was preceded in death by her parents; husband, Rush; sisters, Mildred and Alice; brother, Everett; sons, John and Bob; daughter, Judy; granddaughter, Tiffany Cowdery, and daughter-in-law, Linda. Evelyn is survived by her children, David (Josie), Richard (Michele), George (Char), Marlene (Brian Cowdery), Charlie (Dianne), Tom, Dan; son-in-law, Andy Stanley; daughters-in-law, Susan and Pamm Ledbetter; 19 grandchildren, 22 great-grandchildren; sister, Darlene Taylor, and many nieces and nephews. Evelyn grew up on a farm west of Little Falls. She attended country school until the age of 13, when she began boarding in town so she could attend Little Falls High School. Evelyn loved to tell stories about growing up on the farm. She was known for her great cooking, especially her rolls (she called them biscuits) and Swedish rye bread. Raising her 10 children gave Evelyn lots of experience in the kitchen. There was always a place for anyone at her table. She took great pride and enjoyment in her large family and many friends. Evelyn will be greatly missed by those who loved her. In retirement, she and Rush enjoyed spending winters in Florida for many years. Evelyn was a devout Jehovah’s Witness. She attended the Little Falls Kingdom Hall. Her favorite bible verse was Psalms 37:29 - The righteous themselves will possess the earth and they will reside forever upon it.

Evelyn Idabelle Ahlbom was born to John and Hilma (Bovie) Ahlbom on September 19,1922. She passed away peacefully at home on November 15, 2020 at the age of 98. Evelyn&#8217;s son Tom had been her full-time caregiver for the past several years,... View Obituary & Service Information

The family of Evelyn I. Ledbetter created this Life Tributes page to make it easy to share your memories.

Send flowers to the Ledbetter family.