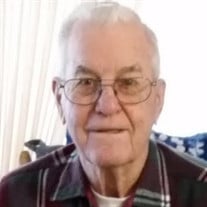 Frederick "Fred" J. Lentz, 91 year old resident of Swanville, MN passed away Saturday, August 14, 2021 at Bridgeway Estates in Little Falls, MN. A Funeral Service will take place on Wednesday, August 18, 2021, at St. Peter's Lutheran Church in Swanville, MN, at 11:00 A.M., with Pastor Kevin Zellers officiating. A visitation will take place on Tuesday, August 17, 2021, at the Swanville Lion's Park, from 4:00-6:00 P.M., and an hour before the start of the service on Wednesday at the church. Burial will take place at St. Peter's Lutheran Cemetery in Swanville, MN. Caring for Fred and his family is the Shelley Funeral Chapel of Swanville, MN. Frederick “Fred” James Lentz, Jr. was born on March 3, 1930 to the late Frederick (Fred) Sr. and Lydia (Rahn) Lentz in Burnhamville, Township, Todd County, Minnesota. Fred attended school in Swanville through the eighth grade, where he met the love of his life, Eunice Johnson. Fred started farming in his teenage years to help support his family. Fred married Eunice on November 24, 1951, at Gethsemane Lutheran Church in Upsala, MN. They had four children: Richard, Elaine, Kenneth, and Jean. In June of 1952, he entered the Army and was stationed in Bamberg, Germany. He achieved the rank of Corporal during his tenure in the Army. He served his country until May of 1954, when he and Eunice settled on his family’s farm. While farming he worked as an auto mechanic at Grey Eagle Motors, Loven’s Service, and Lentz Auto, which he and his eldest son built on the homestead. He retired from farming in 1990. Fred ended his working career as a ground’s keeper and handyman at the Long Prairie Golf Course. Fred loved spending time with his family, especially his grandchildren and great-grandchildren. He enjoyed his winters in Texas, watching airplanes, traveling and was a John Deere enthusiast. Fred and Eunice spent many hours on Sunday drives. He loved to get together with friends for “jam” sessions, where he would sing and play guitar. After retirement you would find Fred tinkering around in his shop as he was the “go to” person for others if they needed work done on their golf carts, lawn mowers and other small engines. Fred was extremely patriotic and a member of the VFW and American Legion. He was also a devote Christian throughout his life. He served as an Elder for St. Peter’s Lutheran Church in Swanville, MN. Fred is survived by his loving wife of 69 years, Eunice; son, Kenneth (Leann) of Oronoco, MN; daughter, Jean (John) Schulte of Burtrum, MN; son-in-law, Wayne Skinner of Oseola, WI; daughter-in-law, Mary Lentz of Onamia, MN; brother, Duane (Pat) Lentz of Burtrum MN. Twelve grandchildren, twenty-six great-grandchildren, and a soon to be born great-grandson. Fred was preceded in death by his father, Frederick Sr. and mother, Lydia; son, Richard and daughter, Elaine Skinner; sisters, Lucille Dehn, Margaret Kreutzer and Marcella Leckwald; brothers-in-law, Glenn Shutter, Ray Dehn, and Aldean (Huntz) Kreutzer.

The family of Frederick "Fred" J. Lentz created this Life Tributes page to make it easy to share your memories.

Send flowers to the Lentz family.