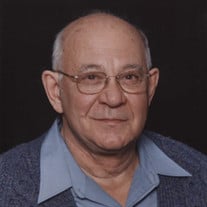 Fredrick "Fred" J. Festler, 84 year old resident of Little Falls, MN, passed away February 22, 2021, at his residence. A Mass of Christian Burial will take place on Thursday, February 25, 2021, at St. Mary's Catholic Church at 10:30 A.M., with Father Mark Botzet officiating. A visitation will take place from 9:30 A.M.-10:30 A.M. at the church prior to the Mass. Burial will take place at the Minnesota State Veterans Cemetery north of Little Falls. In lieu of flowers, memorials are preferred to the family. Fred was born on a small family farm in 1936 and grew up in the Northfield area, until his parents bought a resort business in the Park Rapids and later Walker area in northern Minnesota. He spent his summers scheduling boats and hauling motors for the resort guests and sharing the good fishing spots. After graduating from Northfield High School in 1954, he joined the U.S. Navy and served 4 years, active duty, as a ship electrician on the USS Buttner and USS Pawcatuck during the Korean War. His education was in his many and varied work experiences starting as a draftsman for Possiss Engineering in Minneapolis during the early 1960’s, while caretaker of an apartment building.  From there he left to operate a hardware store in Oklee, Minnesota for 4 years before moving his family to St. Louis, MO, where he was trained to operate an A-frame room-size computer for a private accounting firm. He then worked as a traveling liquor salesman outside the St. Louis area for a period of 2 years before returning to Minnesota to work for Jewell Lighting, selling to hospitals, schools and businesses in central Minnesota. Many hours on the road found him falling asleep at the wheel. At that time he made the decision to sell Real Estate and manage rental properties in Little Falls. The 1980’s found him teaching Behind The Wheel Drivers Ed to high school students, a job he enjoyed. Fred liked cooking and developed his own BBQ sauce. In 1991 he bought a small take out business and named it ‘Chicken and Rib by FES’ later expanding to include catering. He was the first dealer in central Minnesota to use and sell Traeger wood pellet grills, which he used frequently in his catering business. He grilled for the Musser Mansion fundraisers during their summer events and also volunteered at the Fishing Museum later in life. Fred was active in his church, serving on St. Mary’s school board and often lecturing at Mass. He served on the environmental committee in its beginning years and ‘play acted’ in 2 community plays. Fred enjoyed being with the public and was friendly and well received. Fred liked to fish and hunt and taught his children to appreciate the environment by enjoying the outdoors.  He was enthusiastic about taking friends fishing on his favorite lake and showing them a good time fishing.  He taught his children about gardening, by growing food in the backyard. Fred is survived by his wife, Kathleen; his children, Kevin (Marie) Festler, Brian Festler, Shivaun Farlow, Tara Festler, Lisa Hunstiger, Daniel Festler, Mary Justin, Paul (Yaika) Festler; grandchildren, Kyle (Nicole) Festler, Steven (Meredith) Festler, Jared (Jana) Festler, Miranda Festler, Dylan Festler, Lily Festler; 7 great-grandchildren; his two sisters, Mary Helen (Roger) Cyr, Betty (Jeff) Haukebo. Fred was preceded in death by his parents and one infant child.   God willing, we will meet again in Paradise and we will be the best of friends. Your loving wife of 60 years.

The family of Fredrick "Fred" J. Festler created this Life Tributes page to make it easy to share your memories.

Send flowers to the Festler family.