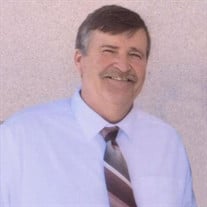 Gary F. Becker 63 year old resident of Little Falls, MN passed away Sunday, March 7, 2021 at his home in Little Falls. A Mass of Christian Burial will take place on Wednesday, March 24, 2021, at 11:00 AM at St. Mary's Catholic Church in Little Falls with Father Mark Botzet officiating. Visitation will be from 4 to 7 PM on Tuesday at the Shelley Funeral Chapel in Little Falls and one hour prior to the service on Wednesday at the church. Burial will be at St. Mary’s Parish Cemetery in Little Falls. To view Gary's funeral via livestream please click link below and you will be re-directed. https://my.gather.app/remember/gary-becker Gary was born in Little Falls, on August 1, 1957 to Theresia (Tretter) Becker and the late Maurice Becker. He was united in marriage to Luann (Landowski) on September 22, 1979. Together they had three children who were the great pride of his life. Gary graduated from Pierz Healy High School and went on to a long career in the boat works industry. He spent time at Crestliner, but moved to Larson Boats, were he spent 36 years until the Little Falls plant closed in 2017. He spent his remaining career at Wabash National as supervisor. In addition to his pride for his children and grandchildren, he loved to take long rides in the country on his motorcycle. Everywhere you went, people would comment how they had seen him on his bike near their home. He also enjoyed camping with his family and hunting with his brothers, sons, and grandsons. Gary was known for lovingly teasing his grandkids and for helping everyone. He was the one his brothers, neighbors and kids called for help. He was the “knower of all things.” He seemed to have the answer to any “fix it” problem and was ready and willing to share that knowledge. Gary is survived by his wife, Luann; sons, Jason (Emily) of Salt Lake City, UT and Jamie (Julie) of Brainerd; daughter, Kristen Hedin (Brad) of Lakeville and eight grandchildren, Lily, Sadie, Cody, Dylan, Levi, Riley, Harper and Nora. He is also survived by his mother, Theresia; brothers, Rodney (Colleen) of St. Paul, Brian (Kelly) of Lastrup; sisters, Valerie (Marvin) Thomas of Pierz, Marilyn (Alvin) Boser, of Pierz, Karen (Terry) Froelich of Pierz and Maureen (Joe) Heisick of Pillager; sister-in-law, Bonnie Becker. Gary was preceded in death by his father, Maurice; brother, Jeff; niece, Angela and nephew Michael.

The family of Gary F. Becker created this Life Tributes page to make it easy to share your memories.

Send flowers to the Becker family.