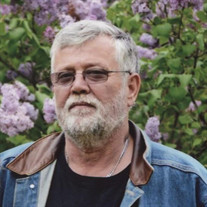 Gary B. Deppa, 67 year old resident of Cushing, MN, formerly of Royalton, MN, passed away Saturday, January 30, 2021, at his residence in Cushing. A memorial service will be held on Saturday, February 6, 2021, at the Royalton American Legion, at 1:00 P.M., with Pastor Jerry Deppa and Pastor Dennis Deppa officiating. A visitation will begin following the service, until 5:00 P.M. at the Royalton American Legion. Gary Deppa was born on April 29, 1953 in St. Cloud, Minnesota, along with his twin brother Jerry, to Barney and Kathryn Deppa. He joined his older brother Dennis and sister Carol at their family home in Foley where they lived until they moved to Princeton in 1961. Gary graduated from Princeton High School in 1972 and then attended St. Cloud Technical College where he studied mechanics. He enlisted in the Navy in 1976 and served on the ship Oriskany for four years. He worked as a mechanic for Eich Motor Company for 33 years. After retiring from Eich, he and his wife LuAnn opened and operated an off-sale liquor store in Royalton. Gary was married to his first wife Dolores in July of 1973. They spent 25 years together until she passed away after a long battle with Hodgkin’s Lymphoma. He married his second wife Kandi (Flatt) in September 2001. They were married for 3 years when she lost her life in a car accident in November 2004. We thank God that he met LuAnn (Segerstrom) in 2007 as she has enriched his life with love and devotion. They were married on July 4, 2013. They lived and worked in Royalton, though recently built a lovely lake home in Cushing, where they resided since June 2020. He hoped to retire there and enjoy the lake, fishing, and family get-togethers, but passed away after a short battle with cancer on Saturday, January 30 at his home. Gary enjoyed playing guitars, snowmobiling, hunting and fishing, doing woodworking, barbequing, his dogs, but mostly spending time with his family. Though not having children of his own, he loved his step-children, step-grandchildren, step-great-grandchildren, nieces and nephews. He was a loving son, husband, uncle, step-dad, and step-grandpa. Gary will be greatly missed by his family and friends. Gary is survived by his wife, LuAnn of Cushing; step-children, Shannon (Jeff) Bromenschenkel of Avon, Shaun (Tonya) Schraut of Little Falls, Sheena (Tremayne Honeycutt) Schraut of St. Cloud, Shantel (Wesley) Waytashek of St. Cloud; 11 step-grandchildren; 2 step-great-grandchildren. Gary is also survived by his siblings, Dennis (Delores) Deppa of St. Louis Park, Carol (Harvey) Eckman of Foley; twin brother, Jerry (Joan) Deppa of Foley; goddaughter, Mary Thames of Hudson, FL; and many nieces and nephews. Gary was preceded in death by his parents, Barney and Kathryn Deppa; previous wives, Dolores and Kandi Deppa; and niece Cheri Dray.

Gary B. Deppa, 67 year old resident of Cushing, MN, formerly of Royalton, MN, passed away Saturday, January 30, 2021, at his residence in Cushing. A memorial service will be held on Saturday, February 6, 2021, at the Royalton American Legion,... View Obituary & Service Information

The family of Gary B. Deppa created this Life Tributes page to make it easy to share your memories.

Send flowers to the Deppa family.