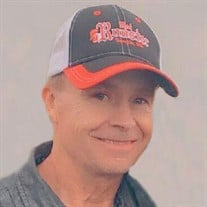 Gary Leo Funk passed December 12, 2020 at his home after a two year battle with cancer. A Mass of Christian Burial will be held at 10:30 A.M. on Thursday, December 17, 2020 at St. Michael's Catholic Church in Buckman, MN with Father Ken Popp officiating. Burial will take place in the St. Michael's Parish Cemetery in Buckman, MN. A visitation will be held from 3-7 P.M. on Wednesday and from 9-10:30 A.M. on Thursday at St. Michael's Catholic Church in Buckman, MN. Funeral arrangements for Gary are with the Shelley Funeral Chapel of Pierz, MN. Gary was born July 17, 1959 to Theodore “Teddy” and Leona (Brausen) Funk. He grew up on the family farm, until moving to Pierz with his family when he was 12. He worked many jobs, starting at a young age. He worked for his family and many neighbors in town and from the country on a wide variety of things. Among the many jobs were milking, fieldwork, shoveling snow, product inventory rotation, and cook. At a young age, he even ran the whole farm of a neighbor, as he stayed on while they recuperated from sickness. He also did quite a bit of trapping. After graduating from Pierz Healy High, he moved to the cities to work as a forklift operator. He had great fun with the many friends who he stayed with. He also worked as a traveling sheet rocker before coming home to work with his brothers on the family farm. Together with his brothers and their families, he helped to run Funk Brothers. He worked hard at the farm. There was a great herd of milking cows, but also beef cows over the years. He also enjoyed raising and helping raise a variety of other farm animals. Many, many memories were made there. After selling the animals, Gary continued on farming the land until a year before his death. While farming, and up until his sickness, he was a great bartender for the Red Rooster in Genola. He was well-liked by his coworkers and many patrons. In the meantime, after moving back home to the farm, Gary married Debbie Veith. Together they had one son, Tony. The couple later divorced. In 2014, Gary married Stacy (Thomas) Herold. From the marriage, he gained a stepson, Thomas Herold. The couple lived down the road from the family farm until his passing. Gary was loved by many. He was often termed to be the “best man in the world”, which he was darn close to. He was so generous and caring. He’d do anything for anyone. He was a master gardener, hunter, and fisherman. He was the first to get his produce in and had loads of trophy game, including the fifth-largest bear in Minnesota, that hangs on the wall in his basement. He shared all the wealth of his endeavors with his big family and many friends. He was also dubbed as the “best bartender”. Many people from miles and miles around new Gary and his great smile, laugh, and full drinks. Gary was always up for a good time and was always right in the middle of the fun. Tons of fun stories of Gary will be shared a million times over, many from his hunting trips out west. Gary is survived by his wife Stacy, stepson Tom, (both at home in Pierz), and biological son Tony. From Tony, Gary has three grandchildren, Tony “TJ”, Raelynn, and Riley Funk. He is survived by siblings, Gerald “Jerry” (Jane) Funk, James “Jimmy” (Lori) Funk, Kenny (Cherri) Funk, Mary (Gary) Meyer, Linda (Dennis/Hup) Hoheisel, Lois Leidenfrost, and David (Gina) Funk. He is also survived by sisters-in-law, Barbara (Babs) Funk, Debbie Funk, and many, many nieces and nephews. He is preceded in death by his parents, Theodore “Teddy” and Leona Funk, brothers Alvin and Francis, niece, Pam Funk and nephew, Tommy Funk.

Gary Leo Funk passed December 12, 2020 at his home after a two year battle with cancer. A Mass of Christian Burial will be held at 10:30 A.M. on Thursday, December 17, 2020 at St. Michael's Catholic Church in Buckman, MN with Father Ken Popp... View Obituary & Service Information

The family of Gary Funk created this Life Tributes page to make it easy to share your memories.

Send flowers to the Funk family.