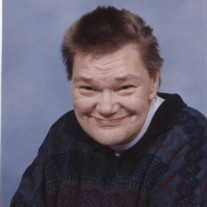 Gary Lee Nelson, 77 year old resident of Little Falls, MN passed away Friday, September 18, 2020 at his residence. A Memorial Service will be held at 1 PM on Friday, September 25, 2020 at Shelley Funeral Chapel in Little Falls, MN, with a visitation one hour prior to the service. Interment will be at Darling Cemetery outside of Little Falls. MDH Guidelines regarding Covid-19 will be followed. Gary Lee Nelson was born on October 15, 1943 Little Falls, MN to the late Walter and Ruth Ann (Bjorklund) Nelson. He grew up in the Little Falls area and resided there all of his life. Gary loved his work at Employment Enterprises, Inc. and was excited to go each day. Gary loved going to church and was a very active participant up until Covid. Televised church was not as interesting to him after churches closed, but he enjoyed singing the songs with staff and would get very excited about Jesus. Some songs he really enjoyed and could sing along to are: Jesus Loves Me, and The Old Rugged Cross. He also would sing Somewhere Over The Rainbow, and You Are My Sunshine. Gary also really enjoyed his puzzles, firetrucks, farms, the fair and cotton candy. He was an outdoors kind of guy and would spend hours outside looking at birds, squirrels, butterflies and flowers. Gary was an all year long supporter of Christmas and his room was nothing short of a Christmas wonderland all year long. He always had a hanky in his pocket and jingle bells. Gary was a jokester and on several occasions had hid tiny fake spiders throughout the house. Staff always new it was him but he wouldn’t admit it (his roaring laughter gave him away every time). Gary was a kind soul, and he left an imprint in every ones lives that he encountered. He was full of life, and laughter. Gary will be missed incredibly by everyone that was blessed with his presence in their life. Gary is survived by his brothers, James Nelson of Maryland, Gerald (Geraldine) Nelson of Texas, DuWayne (Julie) Nelson of Minnesota and Walter (Beverly) Nelson of Colorado. Gary was preceded in death by his parents, Walter and Ruth Ann Nelson, brothers, Jerome Nelson and Don Nelson.

The family of Gary Lee Nelson created this Life Tributes page to make it easy to share your memories.