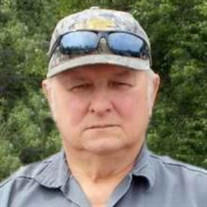 Gerald “Jerry” J. Doschka, 70 year old resident of Little Falls, MN passed away Monday, December 7, 2020 at Regions Hospital in St. Paul, MN. A visitation will be held from 3:00-6:00 P.M. on Saturday, December 12, 2020 at the Shelley Funeral Chapel in Little Falls, MN. A private family burial will take place at a later date at the Minnesota State Veterans Cemetery north of Little Falls, MN. Funeral arrangements are with the Shelley Funeral Chapel in Little Falls, MN. Jerry was born on August 8, 1950 to the late Andrew and Eleanor (Savekoul) Doschka in Little Falls, MN. He graduated in 1968 from Little Falls Community High School with the Class of 1968. Upon graduation, Jerry enlisted into the U.S Marine Corps and was honorably discharged in 1971. He was united in marriage to Joan Sanoski on March 10, 1972. Together they had three daughters soon after marriage. Jerry then joined the MN National Guard where he served for 16 years. He was employed at Crestliner Boats for 16 years and later worked at Polar Tanks for 10 years and retired from DeZurik’s in 2015. Jerry had a passion for anything outdoors. He loved to fish, hunt, trap, cut wood, and had a mind that was always at work thinking of the next project. Jerry would always be the first one in line if someone needed a helping hand. Most of all he shared his love of the outdoors with his three daughters by teaching them to hunt, fish, and enjoy nature. Jerry never let the grass grow under his feet and was dearly loved and will be greatly missed. Jerry is survived by wife of 48 years, Joan Doschka of Little Falls, MN; daughter, Melinda (Troy) Fietek of Little Falls, MN, Melissa (Don) Kranz of Little Falls, MN and Michelle (Steven Czech) Doschka of Little Falls, MN; brother, Jim Doschka of Fort Ripley, MN and Butch (Jan) Doschka of Randall, MN. Jerry was preceded in death by his parents, Andrew and Eleanor Doschka; sister, Helen Welter; brother, Richard (Bud) Doschka; sisters-in-law, Suzanne Sanoski and Charlene Doschka; brother-in-law, Ronald Sanoski Sr. and his beloved companion Hailee.

The family of Gerald "Jerry" J. Doschka created this Life Tributes page to make it easy to share your memories.

Send flowers to the Doschka family.