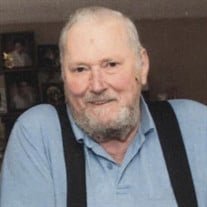 Harry G. Swanson, 85 year old resident at the VA Home in St. Cloud, formerly of Little Falls, MN, passed away peacefully on Saturday, May 22, 2021 at the VA Home. A Funeral Service will be held at 11 AM on Wednesday, May 26, 2021 at Shelley Funeral Chapel in Little Falls. Burial will be in the Minnesota State Veterans Cemetery north of Little Falls. Visitation will be from 4 to 7 PM on Tuesday and 10 to 11 AM on Wednesday at the funeral chapel. Harry George Swanson was born on April 11, 1936 in Little Falls, MN to the late George and Ella (Fregin) Swanson. Harry entered into the service in 1953, serving in Japan during the Korean Conflict. He was honorably discharged in 1956 and continued his service in the National Guard for 28 years. Harry married Margaret (Marge) Belinski on July 23, 1971. The couple settled in Little Falls. Harry primarily worked for Crestliner until retiring in April of 2000. He also drove truck for many different companies, including Little Falls Granite Works and as a potato hauler for Anderson Farms. Harry enjoyed deer hunting, fishing trips, playing cards with family and friends, craftwork, and building birdhouses at the VA home for his family and the VA staff. He was an active member of the Flensburg American Legion for 44 years, Sobieski Lions and a lifetime member of the VFW in Little Falls. Harry is survived by his sons, Allan (Trudi) Swanson of Echo, MN. Scott (Andrea) Swanson of Colorado Springs, CO; daughter, Jody (Ken) Hager of Browerville, MN; other children from a previous marriage, Brenda, Julie, Mike and Janel; grandchildren, Allison Swanson, Adam Swanson, Aidan Swanson, Joshua Hager and Madilyn Swanson; one great-grandson; brother, George (Joyce) Swanson of Little Falls, MN; sister, Gloria Birchem of Little Falls, MN. Harry was preceded in death by his wife, Marge Swanson; parents, George and Ella Swanson; and sisters, Irene Anderson and Arlene Meachum.

Harry G. Swanson, 85 year old resident at the VA Home in St. Cloud, formerly of Little Falls, MN, passed away peacefully on Saturday, May 22, 2021 at the VA Home. A Funeral Service will be held at 11 AM on Wednesday, May 26, 2021 at Shelley... View Obituary & Service Information

The family of Harry G. Swanson created this Life Tributes page to make it easy to share your memories.

Send flowers to the Swanson family.