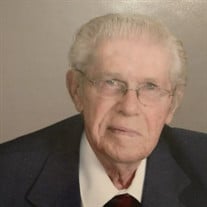 Herman C. Johannes, 91 year old resident of Little Falls, MN passed away Saturday, October 23, 2021 at St. Gabriel’s Hospital in Little Falls. A Funeral Service will take place on Wednesday, October 27, 2021, at 11:00 A.M., at Zion Lutheran Church in Little Falls, MN, with Pastor Gary Hendrickson officiating. A visitation will take place from 9:30 A.M.-11:00 A.M. at the church on Wednesday. Burial will take place at the Minnesota State Veterans Cemetery following the service. Caring for Herman and his family is the Shelley Funeral Chapel of Little Falls. Herman Carl Johannes was born on January 9, 1930, on his parents farm outside of Swanville, MN, to the late Ewald and Martha (Steffen) Johannes. He served from 1948-1951 in the US Air Force, and was stationed in Anchorage, Alaska. He was united in marriage to Lois Marie Jones on August 6, 1951, at Zion Lutheran Church in Little Falls, MN. Herman was a dedicated employee at the Hennepin Paper Co. for over 30 years, and worked many positions, working his way up to Superintendent and finally Mill Manager. He owned and operated Mister Softee Soft-Serve ice cream trucks from 1959-1973. He was the Mayor of Little Falls. Herman and Lois owned Antiques and Collectibles on Broadway from the early 1990's until their retirement in 2019. He served on many boards at Zion, the Little Falls Community School Board, the Lutheran Care Center Board of Directors, and lastly was a member of the Gideon's Club. Herman's hobbies included carpentry, which he built two of their homes, coin collecting, traveling to all 50 states as well as Canada, Europe, and Mexico. He enjoyed spending time with his family and friends. Herman is survived by his wife Lois, of 70 years; daughter, Barbara Prigge (husband Roger); son, Dale Johannes (wife Paula); twin granddaughters, Mandy (Jacob) Wortock, and Melissa (Aaron) Smith; and great-granddaughter, Ava Wortock. He was preceded in death by parents, Ewald and Martha Johannes; sister, Lena A. Johannes; and brothers, Robert O. Johannes, and Otto H. Johannes.

The family of Herman C. Johannes created this Life Tributes page to make it easy to share your memories.

Send flowers to the Johannes family.