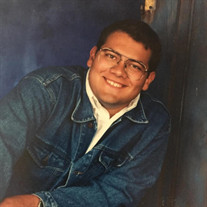 James “Jim” “Jimmy” Kent, 40, lost his courageous battle with cancer June 23, 2020. He was born June 23, 1980 in Onamia Hospital to Deb Campbell and Alan Kent. Jim graduated from Onamia High School 1999. He was working at the scrap yard when he planned on going duck hunting on opening weekend of deer hunting, November 2012. That early morning, braking to avoid a big buck, his pickup went in the ditch and rolled. He sustained a spinal cord injury, leaving him a quadriplegic. He spent 8 months between hospitals and the Courage Center before coming home. He had acclimated to life in a wheelchair with help from his PCA’s, when he was diagnosed with stage IV cancer in March of 2018. He completed two years of Chemotherapy before his liver, and then his kidneys began failing. Despite all the medical issues Jim continued to do the activities he enjoyed: fishing, trapping, hunting, gardening and playing cribbage. Jim will be deeply missed by is his ma, Deb Campbell; brother, Stephen; and his daughters, Dakota, Haylee and Marly; his special friend, Shelley Racine; cousin & fishing/trapping/hunting buddy, Beau and his family; the family dogs, Snookie and Sadie; father, Alan (Sherry); stepfather, Jim Campbell and step-siblings; special nephews, Landin and Carter; special niece, Adi, who would video call every night to say good night to Jimmy; special daughter, Emily, who would get his fatherly advice; loving aunts, uncles, cousins, nieces, nephews; PCA’s and medical staff who attended to his cares, as well as his many friends. He was preceded in death by his grandparents, Marlin and Jane Phillips; Harold and Lorraine Kent; his friend, hunting and traveling partner, Zeb Osbourne; his scrapping buddy, Buford Faust; and his beloved Coon Hound, Annie. His ashes will be placed beside Grandpa Marly and Grandma Jane in Mount Pleasant Cemetery at a later date.

The family of James "Jim" Alan Kent created this Life Tributes page to make it easy to share your memories.