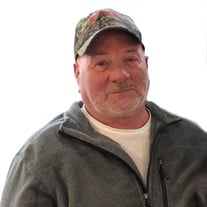 James “Jim” Popp, 66 year old resident of Pierz, MN passed away Wednesday, November 3, 2021 at his home in Pierz. A celebration of life with immediate family will be held at a later date. James "Jim" Popp was born on September 19, 1955 in Little Falls, MN to the parents of Elmer and Bernadine (Grebinoski) Popp. He was united into marriage to Paulette Warzecha on September 27, 1975. Together they had five children, Vanessa, Leah, Rebecca, Kelsie and Jordan. He later was remarried to Sharon Feia (Sobania) on June 18, 2011. Jim graduated from Holdingford High School in 1973. He dairy and hog farmed in Opole until he retired from farming. After that he worked at Holdingford Mill, Pollock’s Feed of Opole, Evergreen Equipment of Little Falls, Pierz CO-OP and Praire Farms. Jim was always the happy prankster man. He took pride in his family, farm and garden. Over the years, Sunday traditions were taking his kids boating on Pelican Lake in St. Anna with a bucket of KFC. He always had a story to tell, whether it was about the squirrels he enjoyed feeding in the backyard, the occasional bear that would come through the yard to eat out of the feeders, stories from his childhood to the silly pranks he pulled. His wife, kids and grandkids were his pride and joy. He always had a bet to place with his grandkids and plenty of snacks and treats to share. He will forever be loved and will always be with us in our hearts. Jim is survived by his wife, Sharon; son, Jordan Popp (Ryan); daughters, Vanessa Popp (Ryan), Leah Vos (Mark), Rebecca Popp (Lee), Kelsie Popp (Josh); step-children, Gina Boeckermann (Russ), Adam Feia (Ashley); brother, Roger Popp (Gail); sisters, Diane Yamry (Fritz), Denae Hlebain (Pete), Kimberly Popp (John Macho), Amy Soltis (Ryan); brother-in-law, Bill Iliffe; seven grandchildren, Anthony and Hunter Boeckermann, Samantha Popp, Mason and Logan Feia, Whitly and Kendal Vos. Jim was preceded in death by parents, Elmer and Bernadine Popp; sister, Lisa Iliffe; step-children, Melanie and William Feia.

James &#8220;Jim&#8221; Popp, 66 year old resident of Pierz, MN passed away Wednesday, November 3, 2021 at his home in Pierz. A celebration of life with immediate family will be held at a later date. James "Jim" Popp was born on September 19,... View Obituary & Service Information

The family of James "Jim" M. Popp created this Life Tributes page to make it easy to share your memories.

Send flowers to the Popp family.