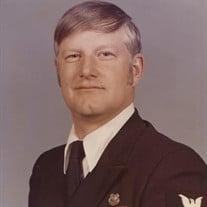 James Walter Mills of Onamia, MN returned to his heavenly home on April 23, 2021 at the age of 79, surrounded by his family. A Funeral Service will be held at 12 noon on Friday, April 30, 2021 at Shelley Funeral Chapel in Little Falls, MN. Burial will be at the Minnesota State Veterans Cemetery north of Little Falls. Visitation will be held from 11 AM to 12 noon Friday at the funeral chapel. James Walter Mills was born on November 26, 1941 in Owosso, MI. He was raised up in this area by his parents, the late William and Mary (McLaren) Mills. James graduated from Corunna High School in 1960. James entered into service with the United States Navy on January 17, 1961. He served two tours of duty in Vietnam. James continued in the Navy, serving in many different locations around the world, working as a Diver First Class and Under Water Construction. He was honorably discharged for a disability after serving 22 years and receiving numerous medals and commendations. James was a loving father that enjoyed coaching local baseball teams, he also enjoyed teaching his children and grandchildren how to fish and spend quality time in nature. James was passionate about his faith and was devoted to helping others in any way that he could. He approached life with an underlying sense of humor, yet was strong in his opinions and beliefs, ready to debate with anyone who wanted lively conversation. James is survived by his children, Joe Mills, Jeremy (Keri) Mills, Ryan (Kristin Perkins) Mills, and Rudy Mills; grandchildren, Abby, Madeline, Chloe, Zoey, Garrett, Liam & Ethan; siblings, Bill Mills & Becky Pearce. Awaiting him in heaven are his parents, Mary and Bill Mills; his son, Randy Mills: brothers, Mike and Robert “Bob” Mills; and his nephews, Kevin Mills, Robert Mills Jr, and Matthew Mills. In lieu of flowers the family requests that any donations be sent to Disabled American Veterans to honor those who have become disabled serving our country.

James Walter Mills of Onamia, MN returned to his heavenly home on April 23, 2021 at the age of 79, surrounded by his family. A Funeral Service will be held at 12 noon on Friday, April 30, 2021 at Shelley Funeral Chapel in Little Falls, MN. Burial... View Obituary & Service Information

The family of James Walter Mills created this Life Tributes page to make it easy to share your memories.

Send flowers to the Mills family.