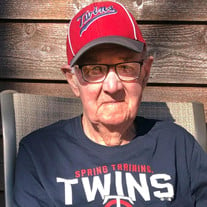 James Root passed away peacefully at Mille Lacs Health System on December 10, 2021, at the age of 85. He is survived by his children, Gregory (Olivia) Root, Bradley Root and Jamie (David) Larsen; sister-in-law Lucille Root; 9 grandchildren, 14 great-grandchildren and many nieces and nephews. Jim is preceded in death by his parents, Samuel (Donald) and Irene Root, wife Pudge Root, brother Darrell, sister-in-law Lou Root and brother Lloyd Root. Jim was born February 24, 1936 in Dodge Center, MN to Donald (Samuel) and Irene Root. He was the first of their 3 boys. He graduated from Dodge Center high school where he met Rochelle (Pudge) Keller. They were from neighboring, rival towns. She, the cheerleader from Claremont, and he the captain of the football team from Dodge Center. They married March 24, 1956 and made their home first in Dodge Center, then in Claremont where they had 3 children, Greg, Brad and Jamie. They also traveled a bit with Jim’s construction job until the spring of 1968, when they and Pudge’s parents sold out and moved to Onamia. Her parents to retire, Jim and Pudge to begin their new life as resort owners. They operated Root’s Resort on the southwest shore of Mille Lacs for the next 17 years where Jim eventually had a secret fishing spot named after him as Root’s Hump. Jim was a hard worker his entire life working pipeline after high school then moving to high-line work. After purchasing the resort he continued that work on weekdays and resort work on the weekends including guided launch trips. Winter on the resort required the entire team as the kids got older with the boys helping on the ice and Jamie in the office. Their little “city on ice” had over 100 fish houses, both rental and privately owned. Over the 17 years of ownership, they and their children made many life-long dear friends. In 1983, after their kids had graduated, they sold the resort and continued to reside in Onamia with Jim now having his own blacktop business with son Brad, R & R Blacktop. They and their right-hand men, Ralph and Ron Biniek paved many local driveways over the years. He eventually retired from it all and loved spending time in his woodshop crafting with Pudge. He was a very talented woodworker and welder. He continued to fish Mille Lacs and other local lakes. Jim’s twice-daily drives along the lake road continued up until he could no longer drive about a year ago. He rarely missed a day to “check out the lake” and visit with friends along the way. After Pudge’s passing nearly 4 years ago he made his home and many new friends at Onamia Shores and the last 7 months at Lake Song Assisted Living. Jim will always be remembered for his kind, helpful manner, his talents and his loving wink and grin. He made many friends and acquaintances along the way who will miss him greatly. His legacy will live on through his crafts left behind, his children, grands and great-grands who were lucky enough to spend time with him. He was cherished and will be missed greatly. He is back with the love of his life whom he missed dearly. A celebration of his life will take place this summer (planning on June 4th) when we can honor him properly with a boat parade to Root’s Hump.

The family of James Donald Root created this Life Tributes page to make it easy to share your memories.