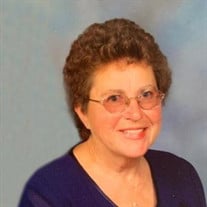 Janet E. Bujarski, 71 year old resident of Hillman, MN passed away Sunday, June 5, 2022 at Abbott Northwestern Hospital in Minneapolis. A Mass of Christian Burial will be 11:00 AM on Wednesday, June, 8, 2022, at St. Rita’s Catholic Church in Hillman, MN with Father Jerry Schik officiating. Burial will be in the Parish Cemetery. Visitation will be from 9 to 11 AM on Wednesday at St. Rita’s Catholic Church. Caring for Janet and her family is the Shelley Funeral Chapel of Pierz, MN. Janet was born on June 22, 1950 in Little Falls, MN to the late Riney and Laura (Hoheisel) Sahr. She was united in marriage to Vernon Bujarski on May 29, 1971 at St. Rita’s Catholic Church in Hillman, MN. Janet was a very fun person who had a great sense of humor. She enjoyed many things such as: reading, doing word finds, playing solitaire, walking daily, keeping up with her flower beds, her cat Puddles, baking, and decorating for holidays. She enjoyed going to garage sales, as well as shopping and going out to eat and getting ice cream. Some of her favorite TV shows included Wheel of Fortune and The Price is Right. Janet also had a big love for black bears and collected little knick-knacks of them. She also enjoyed cleaning, which made her job as a housekeeper fun, especially since she enjoyed her coworkers. Janet’s greatest joys in life were spending time with family and enjoyed playing bean bags at family get-togethers. Her great-grandson, Beau always put a smile on her face. Janet was employed at Mille Lacs Health System as a housekeeper until mid-2021 due to her medical condition. She was a member of St. Rita’s Catholic Church in Hillman, MN and prayed the rosary daily. Janet was dearly loved and will be greatly missed. Janet is survived by her son, Daryl of Hillman, MN; daughter, Cheryl (Ken) Brambrink of Hillman, MN; grandchildren, Cody (Beverly) Bujarski, MaKayla (Derek) Bollig, and Jordan (Holly) Brambrink; great-grandchild, Beau Bujarski; brother, Dale Sahr of Pierz, MN. Janet was preceded in death by parents, Riney and Laura Sahr, and her husband, Vernon Bujarski.

The family of Janet E. Bujarski created this Life Tributes page to make it easy to share your memories.

Send flowers to the Bujarski family.