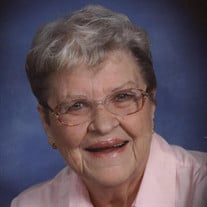 Janet L. Cheney, 84 year old resident of Pierz, MN passed away Thursday, January 28, 2021 at the St. Cloud Hospital in St. Cloud, MN. A Mass of Christian Burial will be held at 10:30 A.M. on Tuesday, February 2, 2021 at St. Michael's Catholic Church in Buckman, MN with Father Ken Popp officiating. Burial will take place in the St. Michael's Parish Cemetery in the Spring of 2021. A visitation will be held from 4-7 P.M. on Monday, February 1, 2021 at the Shelley Funeral Chapel in Pierz, MN and from 9:30-10:30 A.M. on Tuesday at St. Michael's Catholic Church in Buckman, MN. Funeral arrangements are with the Shelley Funeral Chapel in Pierz, MN. Janet was born on April 13, 1936 in Greenville, OH to the late Orville and Vanice (Small) Rudy. She grew up in Ohio and later moved to Minnesota in 1957. Janet was united in marriage to Ervin Cheney on February 15, 1960 at St. Elizabeth's Catholic Church in Brennyville, MN. She loved being a grandmother to her grandchildren as well as a foster grandmother at Pierz Pioneer Elementary School in Pierz, MN. Janet worked with pre-school students and 4th grade students in the computer lab. She was also an avid gardener and passed time doing needle point work. Janet was a member of St. Michael's Catholic Church in Buckman, MN. She played the organ at St. Michael’s as well as at St. Elizabeth's Catholic Church in Brennyville, MN for a combined total of 25 years. At the age of 55, Janet enrolled in school and earned her LPN degree and began working at the Pierz Villa and the Little Falls Lutheran Home. Janet was dearly loved and will be greatly missed. Janet is survived by children, David (LaShel) Cheney of Rice, MN, Charlie (Lisa) Cheney of St. Stephen, MN, Tommy (RuthAnne) Cheney of Little Falls, MN, Brenda (Scott) Gotvald of Hillman, MN, Jerry (Erin) Cheney of Little Falls, MN, Kathy (Jesse) Brezinka of Buckman, MN and Joe Cheney of Avon, MN; 25 grandchildren, 21 great-grandchildren and 3 great-great grandchildren. Janet was preceded in death by her parents, Orville and Vanice Rudy; daughters, Susan Cheney and infant Karen Cheney; grandson, Bobby Cheney and 3 brothers.

The family of Janet L Cheney created this Life Tributes page to make it easy to share your memories.

Send flowers to the Cheney family.