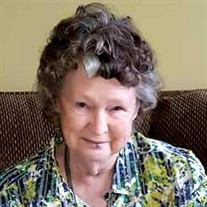 Jean Audrey Mathis, 87 year old resident of Liberty, MO, formerly of Royalton, MN, passed away Thursday, November 5, 2020, due to congestive heart failure. A funeral service will be held for Jean in the spring of 2021. Jean was born on January 29, 1933 in Jeffers, Minnesota to the late Orville and Adona VanNorman. Her early years were spent in the Windom, MN area, where she won a State Spelling Bee competition. In her teenage years, her family moved north to the Long Prairie area. As a young woman, Jean was united in marriage to Roger Schwanke. This union blessed her with 5 children. Although this marriage did not last, she was forever grateful for the children that came from it. Later, she was united in marriage to Lawrence Mathis. The couple made their home along the Mississippi River and were blessed with 2 children. In the early 70’s, Jean went back to school and graduated from St. Cloud Technical School with a certificate in Office Administration. Jean worked for Helmer B. Dale, DDS as an office manager for over 20 years. She loved this job and only missed work when she was in the hospital for colon cancer, which she battled and won! Jean had a love for the outdoors. She enjoyed both flower and vegetable gardening, her nightly bike rides, and sitting outside in her back yard. Jean loved reading, doing puzzles, and baking. She loved holidays because it meant a house full of excitement and baking a huge variety of Christmas cookies and candies that she loved to share with everyone. She had a compassion and quality about her that made her a friend to all that she met. Jean’s biggest love was her family. The love of spending time with her children, grandchildren, and great-grandchildren was what occupied the biggest space in her enormous heart. Jean is survived by her children, Susan (Michael) Andersen of Apple Valley, MN, Michael (Delores) Schwanke of Little Falls, MN, Richard (Kristen) Schwanke of Little Falls, MN, Sandra (John) Morgan of Roaring Spring, PA, Jacquelyn (Timothy) Shoemaker of Liberty, MO, and James Mathis of Bismarck, ND; siblings, Gerald (Carol) VanNorman of Long Prairie, MN, Shirley (Jerry) Markkula of Sebeka, MN, Larry VanNorman of Swanville, MN, Dale (Deb) VanNorman of Browerville, MN, Joy Schooler of Hutchinson, MN, and Bruce VanNorman of Browerville, MN; grandchildren, Angela, Jens, Lacie, Travis, Tyler, Michael G., Ginger, Nick, Nate, Noah, Richard, Jr., Arik, Hannah, Toby, Stephanie, John, Jr., Scott, Christopher, Michael P., Mason, Maeghyn, Emma, James, Jr., and Alex; great-grandchildren, Ian, Ryan, Dominic, Elsie, Ben, Nora, Jordis, Rylee, Maisie, Kelsie, Dylan, Dalton, Lilliana, Adrian, Liam, Carter, Jaxson, Ashleigh, Logan, Gavin, Gwenavere, Mayvis, and Meredith and numerous nieces and nephews. Jean was preceded in death by her parents, Orville and Adona VanNorman; husband, Lawrence Mathis; son, Robert Schwanke, and brother-in-law, Richard Schooler.

Jean Audrey Mathis, 87 year old resident of Liberty, MO, formerly of Royalton, MN, passed away Thursday, November 5, 2020, due to congestive heart failure. A funeral service will be held for Jean in the spring of 2021. Jean was born on January... View Obituary & Service Information

The family of Jean Audrey Mathis created this Life Tributes page to make it easy to share your memories.

Send flowers to the Mathis family.