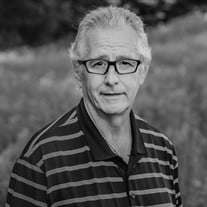 Jeremy Lee Phillips (The Frog), 59, of Upsala, MN, passed away peacefully on September 22, 2021. A Memorial Gathering will be held on Friday, November 12, 2021 from 4:00 P.M. to 8:00 P.M. at St. Mary's Catholic Church in Upsala, MN. Caring for Jeremy and his family is the Shelley Funeral Chapel of Little Falls, MN. Jeremy was born on October 8, 1961 to Bill Phillips and Dicie Duckworth. He attended school at Parkersburg South High in West Virginia. Following high school, he was in the US Air Force from 1979-1986 serving our country. During his time serving, he moved to Colorado, where he met Cindy. Jeremy and Cindy then moved back to Minnesota, where they were married in 1991, and became entrepreneurs together. He owned several bars, restaurants and was dedicated to serving his patrons and community. In his spare time, he loved golfing, fishing, and spending time with his family. He is survived by his wife, Cindy Phillips; daughter, Jennifer Merritt, son, Jeremy Phillips, daughter, Natalie Mann (Chris), daughter, Hannah Phillips (Erin), daughter, Lauren Phillips (Josh). His father Bill Phillips; mother, Dicie Duckworth, and brother, Jesse Phillips (Tonya). He was also loved by his grandchildren, Keagan, Addison, Emmitt, Ella, Ellie, Elliott, Calvin, and Roman.

The family of Jeremy Lee Phillips created this Life Tributes page to make it easy to share your memories.

Send flowers to the Phillips family.