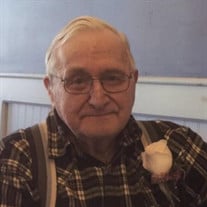 Jerome “Jerry” Golombiecki, 90, passed away Tuesday, December 1, 2020. Due to Covid-19, there was a private family service. Burial took place in Sacred Heart Cemetery in Flensburg, MN. Jerome Golombiecki was born on the family farm on May 1, 1930 in Culdrum Township, to the late Peter and Sophie (Peschel) Golombiecki. He was baptized and confirmed at Sacred Heart Church in Flensburg and attended school grades 1-8 in Flensburg. As a young man, he worked on his father’s farm, John Goodman’s Saw Mill and also did odd jobs for Super Hardware in Flensburg. Jerry was drafted into the military in 1952. He did his basic training in Fort Leonard, MO. He sailed aboard ship for 23 days before landing in Korea on his birthday. Jerry was honorably discharged in 1954 as Corporal, receiving several medals. Jerry married Edna Axel in April of 1957. In 1959, Jerry and Edna and his brother, Joseph purchased the family farm. Together they farmed dairy, beef, hogs and chickens. They also did custom work for the surrounding farmers. Jerry purchased a sawmill from Paul Larson and sawed lumber for many years. He later sold the mill to Itasca Park Museum. Tragedy struck when they lost their son Scott in a car accident in 1993. Dairy farming came to an end. He then became semi-retired and rented out the farm land. His brother Joe passed away in 1999. Jerry was a lifetime member of the American Legion, VFW and DAV. He was a volunteer fireman for the Flensburg Fire Department for 30 years. He was a district sales representative for several companies, including Trojan, Keltgen and Microgyn for nearly 45 years. Jerry is survived by his wife, Edna of 63 years; daughter, Sandra; grandchildren, Laura (Michael) Niska, Rachel (Jason) Welsh, Preston (Nicole) Waldoch, Gary (Kayla) Kostecka, Sophie (Erik) Thompson; great-grandchildren, Lola, Ava, Sarah, Sadie, Shane, Kelsey, Samantha, Lily, Michael, Avery, Emmett and one on the way June, 2021. Jerry was preceded in death by his son, Scott; parents Peter and Sophie Golombiecki; great-granddaughter, Audrey and all of his brothers and sisters.

The family of Jerome "Jerry" Golombiecki created this Life Tributes page to make it easy to share your memories.

Send flowers to the Golombiecki family.