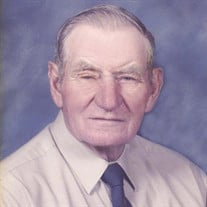 Jerome C. Weiss, 93 year old resident of Harding, MN, passed away Saturday, October 3, 2020, at the St. Joseph’s Hospital in Brainerd, MN. A Mass of Christian burial will be held at 11:00 AM on Friday, October 9, 2020, at St. Joseph’s Catholic Church in Pierz, MN, with Father David Maciej officiating. Burial will take place in the parish cemetery. A visitation will be from 9:00 to 11 A.M. on Friday at the church. Due to Covid-19 there will be no luncheon after the service. In lieu of flowers, memorials are preferred. Jerome was born on March 29, 1927 at home in Pierz, MN to the late Frank and Margaret (Meyer) Weiss. He attended St Joseph’s Catholic School in Pierz through 8th grade. He graduated from Little Falls High School in 1945. Jerome started the first of many of his job careers working for Sylvester Weiss in the grocery store and later worked for Jake Gilbride in the car dealership and the potato farms in North Dakota. He met the love of his life, Alice Otremba at a barn dance in Harding in 1947. They were married on June 14, 1950 at Holy Cross Catholic Church in Harding, with the reception being held on the Otremba farm east of Harding. They lived in Pierz until 1954, when they purchased the farm North of Harding and together raised their 8 children. Jerome farmed and worked for the Farmer’s Mill in Pierz for many years and Brisk Construction during the summer months, working all over Minnesota. He had a love for farming, playing cards, fishing, hunting, snowmobiling and spending time at the lake cabin. He especially loved spending time with his grandkids and great-grandkids and telling them the stories of meeting Alice and his life growing up on the family farm. Jerome is survived by his children, LyAnn (George) Kummet of Pierz, Robert Weiss of Pierz, Charles (Ruth) Weiss of Nome, AK, Cleo (Ron) Arends of Manson, Iowa, Lois Metcalf of Little Falls, Donald (Lehtitia) Weiss of Brainerd, Denice (Loren) Athman of Pierz, John Weiss (special friend, Sheri Mitchell) of Pierz; sister, Delrose (Fran) Trutwin of Anderson, SC., 20 grandchildren, 33 great-grandchildren and 2 great-great grandchildren. Jerome was preceded in death by his wife Alice in 2008; parents; brothers, Roland and Gerald; sons-in-law, Denny Abel and Vern Metcalf; daughter-in-law, Mary Jo Weiss and granddaughter, Vanessa Weiss.

The family of Jerome C. Weiss created this Life Tributes page to make it easy to share your memories.

Send flowers to the Weiss family.