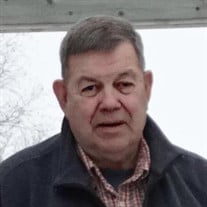 Jerry Noble, 80-year-old resident of Onamia, MN passed away on Thursday, August 13, 2020 at The Gardens at Foley in Foley, MN. Arrangements for Jerry are with the Shelley Funeral Chapel of Onamia. Jerry was born November 12, 1939 in Minneapolis. He graduated from Minneapolis Roosevelt High School in 1957. Jerry loved playing football, and earned many honors including All City. He continued his football career playing at the University of North Dakota on a football scholarship. Jerry served his country in the United States Navy aboard the USS Saratoga. On December 27, 1960 Jerry and Christie eloped to Mason City, Iowa. They started their family and lived in Minneapolis, Bloomington, Hillman and Onamia. They truly enjoyed attending school and sporting events for their children and grandchildren. Jerry was a life-long gardener and enjoyed raising his own flowers and vegetables from seed in his greenhouses. After retiring from Mille Lacs Kathio State Park, he started raising finches and canaries. He joined bird clubs where he made many friends. Jerry became well-known for his quality birds and earned several ribbons and honors in shows around the country. Jerry was also dedicated to his “outside birds,” constantly tending to the feeding stations around his yard. Jerry was especially proud of his granddaughters’ accomplishments and took great joy in his great-grandsons. Family events were his favorite, and his children and family are comforted by all the memories of his well-lived life. Jerry is survived by his daughter, Kari Noble of Onamia, MN; son, Douglas Noble of Onamia, MN; daughter, Jenelle (Hugh) Quinn of Grand Rapids, MN; grandchildren, Elissa (Josh Kuhn) Noble of Baxter, MN, Margaret (David) Walsh of Duluth, MN, Alexandra Quinn of Grand Rapids, MN; and great-grandsons, Maximilian Walsh and Gabriel Walsh of Duluth, MN. He was preceded in death by his wife, Christie (Prindle) Noble in 2004; and his mother, Frances (Hokanson) Noble in 1990.

Jerry Noble, 80-year-old resident of Onamia, MN passed away on Thursday, August 13, 2020 at The Gardens at Foley in Foley, MN. Arrangements for Jerry are with the Shelley Funeral Chapel of Onamia. Jerry was born November 12, 1939 in Minneapolis.... View Obituary & Service Information

The family of Jerry Hartsel Noble created this Life Tributes page to make it easy to share your memories.

Jerry Noble, 80-year-old resident of Onamia, MN passed away on...