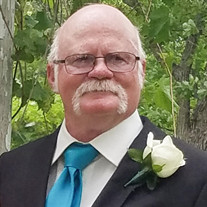 Jerry Ray Steinert, 69 year old resident of Little Falls, MN, passed away Tuesday, October 20, 2020, at the Sanford Medical Center in Fargo, ND. Funeral arrangements are pending for the Spring of 2021 for Jerry. Jerry was born on September 28, 1951, to the late Clarence Steinert Sr. and Irene Steinert (Branvold) in Morris, MN. He was united into marriage to Patricia Rothleutner on May 8, 1982. Jerry was in the Air Force, and served for 4 years. He worked at Larson Boats for 25 years until retirement. In Jerry’s free time, he could be found fishing, hunting, and anything outdoors. Jerry loved building dressers, and he especially loved spending time with his wife, family, and his grandkids. He loved everyone’s company just to talk and to catch up. Jerry is survived by wife, Patricia Steinert; son, Clarence A. Steinert Jr., wife, Sue Steinert; daughters, Krystal Haupt (Steinert), Sondra VanScoik (Steinert), and her husband, Jason VanScoik; brother, Clifford Steinert; sister, Sandra Humphrey (Steinert); and 11 grandchildren. Jerry was preceded in death by parents, Clarence A. Steinert Sr. and Irene (Branvold) Steinert.

The family of Jerry Ray Steinert created this Life Tributes page to make it easy to share your memories.

Send flowers to the Steinert family.