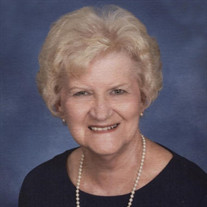 JoAnn E. Shelley, 91 year old resident of Little Falls, MN passed away Tuesday, November 10, 2020 at St. Gabriel's Hospital in Little Falls, MN. A funeral service will be held at 11:00 A.M. on Thursday, November 19, 2020 at Grace Covenant Church in Little Falls, MN. Burial will take place in the Minnesota State Veterans Cemetery north of Little Falls, MN. A visitation will be held from 3:00-6:00 P.M. on Wednesday at the Shelley Funeral Chapel in Little Falls, MN and from 10:00-11:00 A.M. on Thursday at Grace Covenant Church in Little Falls, MN. MDH guidelines requiring masks and social distancing will be followed. Funeral arrangements are with the Shelley Funeral Chapel in Little Falls, MN. JoAnn was born on September 6, 1929 in Minneapolis, MN to the late John and Agnes (Swan) Brustad. She attended school in Minneapolis and graduated from Roosevelt High School with the Class of 1947. JoAnn was united in marriage to Dale A. Shelley on June 5, 1948 at Redeemer Lutheran Church in Minneapolis, MN. She attended the University of Minnesota and graduated in 1957 as a licensed funeral director. In 1958, Dale and JoAnn purchased the Leo M. Thompson Funeral Home in Little Falls, MN. JoAnn worked along side her husband Dale for 30 years until 1988 when they sold the funeral home to their son Steve. The couple enjoyed wintering at Daytona Beach, Florida for 47 consecutive years. Usually, her brothers and most of her sisters were in Florida at the same time. One of the most memorable trips was spending three weeks in Norway getting to meet relatives. They also enjoyed spending the summer months at their cabin on Gull Lake near Nisswa, MN. She was an active member of Grace Covenant Church in Little Falls as well as the Gideon's and the Royalton Bible Study. JoAnn loved spending time with her family and grandchildren. She was dearly loved and will be greatly missed. JoAnn is survived by children, Susan (Nick) Brown of Wayzata, MN, Steve (Gwyn) Shelley of Little Falls, MN and Scott (Julie) Shelley of Cambridge, MN; sister, Charlotte Bonstrom of Eagan, MN; sister-in-law, Jean Brustad of Burnsville, MN; grandchildren, Stephanie (Steve) Lindell, Sarah (Justin) Clark, Eric Shelley, Emily (Kyle) Johnson, Leah (Brett) Anderson and Mark Shelley and great-grandchildren, Wyatt Lindell, Liam Lindell, Ruby Clark, Eliud Anderson and Nick Anderson. JoAnn was preceded in death by parents, John and Agnes Brustad; husband, Dale A. Shelley; brothers, Harold and Lloyd; and sisters, Margaret, Olive, Helen, Dorothy, and Lillian.

The family of JoAnn E. Shelley created this Life Tributes page to make it easy to share your memories.

Send flowers to the Shelley family.