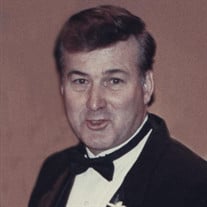 John H. Hanson, 80 year old resident of Swanville, MN passed away Sunday, May 2, 2021 at the St. Cloud Hospital. A Mass of Christian Burial will be held at 2:00 P.M. on Saturday, May 15, 2021, at St. John’s Catholic Church in Swanville, MN with Father Ronald Dockendorf officiating. Burial will be in Bearhead Cemetery west of Pillsbury, MN. Visitation will be from 12 to 2 PM on Saturday at St. John’s Catholic Church in Swanville. Military Rites will be conducted by the Long Prairie VFW. John Henry Hanson was born on September 29, 1940 in Morrison County, Minnesota to the late Frank Hanson & Gladys (Martin) Hanson. He was united in marriage to Mary Kanieski on May 19, 1962. They lived on a hobby farm near Swanville. John served overseas in Korea as a MP (Military Police) in the Army from 1958-1961. He then served in the military reserve from 1961-1964. John was the Superintendent of Fabrication in the boning and shipping department for Long Prairie Packing Company until retirement. He was a member of the VFW in Long Prairie. John loved spending time with family and friends. He will be remembered for his work ethic, collections, and for being meticulous. He was absolutely the best storyteller and card player. John was also an avid bowler and a dedicated deer hunter. John’s best day was in August, 2018 when an Angel of the Lord comforted him at the Staples Hospital. John is survived by his wife, Mary of nearly 59 years; children, John Dean, Lori (Joel), Gregory, Sheri (Steve), and Carrie (Bob); twenty-one grandchildren, and twenty great-grandchildren; brother, Burt and sisters, Bernice and Viola. John was preceded in death by his parents, Frank and Gladys Hanson; brothers, Dewayne and Vernon; sisters, Irene and Grace and daughter-in-law, Susan Hanson. Pallbearers will be Nathan Hanson, Michael Hanson, Kody Kuhl, Jake Hanson, Austin Johnson, and Gage Hanson.

The family of John H. Hanson created this Life Tributes page to make it easy to share your memories.

Send flowers to the Hanson family.