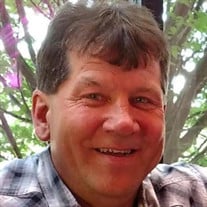 John "Hunts" A. Lange, 56 year old resident of Swanville, MN passed away Sunday, June 28, 2020 at his home in Swanville, MN. A remembrance service will be held at 12:00 P.M. on Friday, July 3, 2020 at the Swanville Lion's Park in Swanville, MN. A visitation will be held from 10-12 P.M. on Friday at the Swanville Lions Park in Swanville, MN. MDH Guidelines requiring social distancing will be followed. Funeral arrangements are with the Shelley Funeral Chapel in Swanville, MN.  John Lange was born on October 28, 1963, to Daniel and Marian (Brinkman) Lange at St. Gabriel’s Hospital in Little Falls, MN. John lived life to the fullest. He grew up in Upsala, MN and later moved to Chicago, IL for many years. He was a hard worker. John worked construction on high rises, bridges, and commercial buildings for many years. He also drove truck and ran his own insulation business for many years. He was most proud of being a union carpenter. He was known to be a handyman; fixing or making something work was his passion. John was united into marriage to Sandra Peterson on August 1, 2015, at St. Peter’s Lutheran Church in Swanville, MN. In his free time, you could often find him working on wood projects, fishing, or hunting. The lake was his church. John loved plowing snow and having fun. He was always up for a good time and was known to tell stories. John was always willing to help anybody who needed his help. He was a good man but was a broken man that battled with many struggles and was no longer able to cope. John was greatly loved and will be dearly missed. John is survived by wife, Sandy Lange of Swanville, MN; parents, Daniel (Rita) Lange of Freeport, MN, and Marian Brinkman of Annandale, MN; children, Gabrielle Mrosla of St. Louis Park, MN, and Daniel (Jacqueline) Lange-Vagle of Boston, MA; step-children, Michelle (Lonny) Hutchins of Swanville, MN, and Carl Peterson of Swanville, MN; siblings, Rosanne (Ambrose) Opatz of Annandale, MN, Paula (Barb) Lange of St. Cloud, MN, Joan (Dale) Donnay of Sauk Centre, MN, Bob (Lynn) Lange of Watkins, MN, Henry Lange of Otsego, MN, and Katie (Josh) Bartkowicz of Albany, MN; grandchildren, Milo, Ellen, and Louis Hutchins; and many nieces and nephews. John was preceded in death by grandparents, Joe and Rose Lange, Henry and Rose Brinkman; and sister-in-law, Susan Lange.

The family of John "Hunts" A. Lange created this Life Tributes page to make it easy to share your memories.

Send flowers to the Lange family.