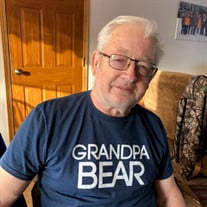 Joseph “Joe” L. Masog, Jr., 76 year old resident of Little Falls, MN passed away Monday, February 22, 2021 at the St. Gabriel’s Hospital in Little Falls. A Mass of Christian Burial will be on Saturday, February 27, 2021, at Our Lady of Lourdes Catholic Church in Little Falls, MN, at 10:30 A.M., with Father Ben Kociemba officiating. Burial will be in the Parish Cemetery. Visitation will be on Friday at the Shelley Funeral Chapel in Little Falls, MN, from 4 to 7 P.M., and one hour prior to the service on Saturday at the church. Military Rites will be conducted by the Little Falls VFW Post #1112 and American Legion Post #46. Joe was born on October 18, 1944, in Brooklyn, New York, to the late Joseph (Regina Posch) Masog, Sr. Joe graduated in 1962 from Little Falls High School. From June 29, 1962 to February 17, 1966, he served in the US Navy. He served in Vietnam and was stationed on the USS Mansfield. Joe was united in marriage to Dorothy Hurrle on January 7, 1967 at St. James Catholic Church in Randall. Joe worked for the US Postal Service as a city mail carrier for 36 years. He was lucky to be able to retire at 55 and enjoy his retirement through fishing, hunting, gardening, processing wood, picking nightcrawlers, playing cards, making sausage, and smoking fish. He loved to play softball and was a great pitcher. Over the years, he was able to play softball with his three kids and five of his grandkids. He played his last game when he was 73 years old. Joe enjoyed spending time with his wife, kids, and grandkids, and spending lots of time at the ballpark. He also enjoyed visiting with his friends and family. Joe was expecting his first great-grandchild in August. Joe was a lifetime member of the VFW Post #1112 and member of the American Legion Post #46. Joe is survived by his wife, Dorothy; son, Ricky (Kari) Masog; daughter, Jackie (Ken) Retka and son, Joey (Katie) Masog. Grandkids, Matthew (Hannah) Masog, Nathan Masog, Christy Masog, Nick (Lyndsey Wunderlich) Retka, Erin (Chris Gammon) Retka, Brynlee Masog, Wyatt Masog; brothers-in-law, Jim (Pudge) Hurrle, John Hurrle; sister-in-law, Kathy Krumrei and many nieces, nephews and cousins. Joe was preceded in death by his parents, Joseph and Regina Masog, Sr.; infant brother; mother and father-in-law, Henry and Vivian Hurrle; brother-in-law, Marvin Krumrei and sister-in-law, Deanna Prozinski. Honorary Pallbearers will be Erin Retka, Christy Masog, Brynlee Masog, Wyatt Masog. Active Pallbearers will be Matthew Masog, Nick Retka, Nathan Masog, Dick Johnson, Denny Johnson and Bill Backowski.

The family of Joseph "Joe" L. Masog, Jr. created this Life Tributes page to make it easy to share your memories.