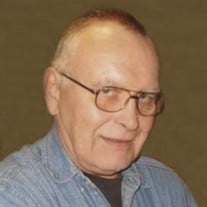 Joseph Mallak, 69 year old resident of Little Falls, MN, passed away on Monday, July 5, 2021 at the St. Cloud Hospital. A memorial service will be held at 11:00 A.M. on Friday, July 16, 2021 at the Shelley Funeral Chapel in Little Falls, MN. A visitation will be held from 9:30-11:00 A.M. on Friday, July 16, 2021 at the Shelley Funeral Chapel in Little Falls, MN. Caring for Joe and his family is the Shelley Funeral Chapel in Little Falls, MN. Joe was born on April 23, 1952 in Sobieski, MN to the late Henry and Delores (Wochnik) Mallak. He grew in the Sobieski area and attended school in Little Falls, MN. Joe was employed at Oklahoma Tank and later went to work at Crestliner Boats in Little Falls from 1987 until 2009 as a boat finisher. He was united in marriage to Patricia LeMieur on December 23, 1979 in Little Falls, MN. Joe enjoyed visiting the local coffee shops to visit with his buddies and catch up on the days news. He was also an avid scrap metal collector, saving and sorting all types of metal to make a little side money. Joe was very good to his family especially his grandchildren who he loved dearly and also enjoyed taking his mother and father-in-law for rides around area lakes and sites. He was dearly loved and will be greatly missed. Joe is survived by wife, Patty Mallak of Little Falls, MN; son, Jake (Shelly) Schwanke of St. Cloud, MN; sisters, Mary (Kurt) Dreiling-Herold of Little Falls, MN and Gloria (Glen) Welle of Otsego, MN; brother-in-law, Doug (Rita) LeMieur of Sobieski, MN and grandchildren, Zach, Alex and Nick Schwanke. Joe was preceded in death by his parents, Henry and Delores Mallak; brother, David (Shelia) Mallak; mother and father-in-law, Ed and Louise LeMieur and nephew, Frank Handeland.

The family of Joseph Mallak created this Life Tributes page to make it easy to share your memories.

Send flowers to the Mallak family.