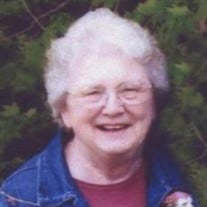 Joyce E. Popken, 82 year old resident of Swanville, MN, passed away on Friday, September 18, 2020 at the St. Cloud Hospital. Funeral services will be held at 11:00 A.M. on Tuesday, September 22, 2020, at St. Peter’s Lutheran Church in Swanville, MN with Rev. Kevin Zellers officiating. Burial will take place in St. Peter’s Lutheran Cemetery in Swanville, MN. A visitation will be held from 4 -7 P.M. on Monday and from 10 - 11 AM.. on Tuesday at St. Peter’s Lutheran Church in Swanville, MN. Joyce was born on January 1, 1938 in Oakland, Nebraska to the late Linde and Sophia (Lohmeyer) Nelson. She grew up in Oakland and attended rural District 67 until she reached high school, graduating from Oakland High School in 1955. Joyce attended Wayne State for several summer school sessions, earning her certification to teach in rural schools, which she did for five years. Joyce married Robert Popken at Elim Lutheran Church, Hooper, Nebraska, on May 25, 1958. She and Robert farmed near Uehling, Nebraska for several years, eventually moving to Swanville in February, 1973. Joyce lived and worked on the farm the remainder of her life. She was a devoted wife to her beloved Bob. Taking long walks in the pasture was a special pleasure for Joyce. She liked searching for and enjoying spring flowers and the brilliance of fall colors. Eventually, Joyce found an artistic outlet in making and painting ceramic figures. Her specialty was ornaments. She sold them at craft shows, but her favorite pleasure was giving them to special people she remembered year after year. She enjoyed her family, those near and at a distance, her extended family, and the family she created by investing in her neighbors and friends. Joyce was a strong believer in our Lord Jesus Christ and is now at peace with Him in eternity. She was an active member of St. Peter’s Lutheran Church, Ladies Aid, Dove Homemakers, and Northern States South Devon Association. Joyce is survived by her husband, Robert; sons, Ryan (Sonya) Popken, Hawkinsville, GA, and Joel Popken, Swanville; grandchildren, Maggie, Ryanne and Joseph Robert Popken; brothers, Jim (Judy) Nelson of Oakland, NE, Richard (Phyllis) Nelson of Topeka, KS, and Don (Bonita) Nelson of Ord, NE. Joyce was preceded in death by her parents, Linde and Sophia Nelson, and her brothers, Kenny Nelson and John Nelson.

The family of Joyce E. Popken created this Life Tributes page to make it easy to share your memories.

Send flowers to the Popken family.