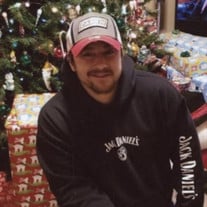 Kaleb James Staneart, 31 year old resident of Little Falls, MN passed away Monday, February 22, 2021 at his home in Swanville, MN. A memorial service will be held at 3:00 P.M. on Sunday, February 28, 2021 at the Shelley Funeral Chapel in Little... View Obituary & Service Information

The family of Kaleb James Staneart created this Life Tributes page to make it easy to share your memories.

Send flowers to the Staneart family.