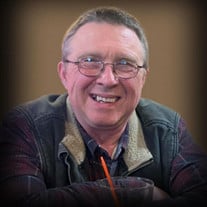 Keith C. Bartlett, 58 year old resident of Ft. Ripley, MN, passed away on Friday, November 26, 2021 at the St. Cloud Hospital. A Funeral Service will be held at 1 PM on Sunday, December 5, 2021 at the Falls Ballroom in Little Falls, MN with a visitation starting at 11 AM on Sunday. Following the service, a lunch will be served at the Falls Ballroom. Caring for Keith and his family is the Shelley Funeral Chapel of Little Falls, MN. To view Keith's service via livestream click link and you will be re-directed to the livestream. https://my.gather.app/remember/keith-bartlett Keith was born on February 15, 1963 to Ervin and Bonieva Bartlett in Hibbing, MN. They lived in Cook, MN for a few years before moving to Isanti, MN. Keith graduated from Cambridge High School in 1981 and returned “home” to Cook, MN. No matter where life took him he considered Cook to be home. Keith attended Hibbing VoTech to become a Diesel Mechanic and upon graduation he was hired by Ziegler, Cat in Bloomington, MN. When Ziegler opened a branch in St. Cloud, MN he transferred there and made his home in Rice, MN. In 2008, Ziegler opened a store in Brainerd, MN and Keith became the Branch Manager of the store. He took great pride in his store and everyone that worked there. Keith was united in marriage to Mary Vekved on October 18, 1997 and they were later blessed with two beautiful daughters, Kate and Hannah. When Keith was not working at the shop, he found various projects to work on at home or with friends. He was always willing to help anyone with any project and could fix everything he was handed. He enjoyed spending time with his friends and family going camping, ranger riding, and having a few busch lattes and “scootches” of brandy every once in awhile. Keith enjoyed his yearly fishing trips to Fitchie Lake in Canada with the guys and his yearly snowmobile trip with “the Hens”. He also enjoyed going to deer camp every fall to make sure no one left their stuff laying around the garage. Keith will be deeply missed by everyone who knew him, he had a way of touching the lives of anyone he crossed paths with. Keith is survived by his wife, Mary; daughters, Kate (Mitchell Nelson) Bartlett, Hannah Bartlett; Mother, Boni (Russ Swonger); Brother, Kent Bartlett, and many special Aunts, Uncles and Cousins. Keith was preceded in death by his father, Ervin; step-mother, Gloria, and his grandparents.

Keith C. Bartlett, 58 year old resident of Ft. Ripley, MN, passed away on Friday, November 26, 2021 at the St. Cloud Hospital. A Funeral Service will be held at 1 PM on Sunday, December 5, 2021 at the Falls Ballroom in Little Falls, MN with... View Obituary & Service Information

The family of Keith C. Bartlett created this Life Tributes page to make it easy to share your memories.

Send flowers to the Bartlett family.