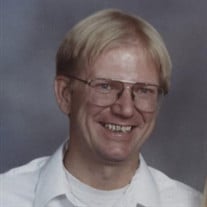 Kelly J. Trang, 59 year old resident of Pierz, MN went to be with the Lord on Tuesday, August 18, 2020 at his home in Pierz, MN. Funeral Service will be held at 11 AM on Saturday, August 22, 2020 at Faith Lutheran Church in Little Falls, MN, with Pastor Nate Bjorge officiating. Burial will be at a later date, Visitation will be from 4 to 7 PM on Friday at the Shelley Funeral Chapel in Little Falls and one hour prior to the service on Saturday at the church. "The service will be posted to YouTube for those who are unable to attend." Kelly was a strong believer in Jesus Christ and a strong advocate for Creationism. He led several Sunday school classes on the subject and shared his faith with many people. At the time of his death, he was a member of Faith Lutheran Church in Little Falls. He was looking forward to being with His Lord Jesus Christ. Kelly was born December 19, 1960 to Lalon and Arlene (Ramsbacher) Trang in Scobey, MT. He grew up in eastern Montana with two brothers, Roger and Thom, and two sisters, Barbara and Vicki. He loved working on the farm. He was joined in marriage to Pamela Lee Nelson on March 5, 1983. They lived close to home, then moved to Billings, MT where Kelly attended vocational school to become a diesel mechanic. After graduating from Vo Tech, Kelly and Pam moved to the Twin Cities area. Kelly was not a fan of the city life. After a couple of years they moved to central Minnesota, where Kelly and Pam raised one daughter, Morgan, and two sons, Jacob and Caleb. Kelly worked at Pueringer Multifoods as a truck Mechanic for nine years. He then went to work at Road Equipment Parts Center/Fleetpride in Brainerd and worked there until no longer able, due to his health. Kelly loved to work with his hands and in his garage. He built a model farm and a model airplane for his children when they were small, and taught Morgan how to use his woodworking tools. He worked on all the family and relatives’ cars. He restored several John Deere tractors. He shared his technical wisdom even after he was no longer able to leave his chair. Kelly is survived by his wife, Pamela (Nelson) Trang; mother, Arlene (Ramsbacher) Trang; daughter, Morgan Bement (husband Daniel); sons, Jacob and Caleb Trang; brothers, Roger Trang (wife Terry) and Thomas Trang (wife Dina); sisters, Barbara Castleman (husband Michael) and Vickie Heupel (husband Justin). Kelly was preceded in death by his father, Lalon Trang.

Kelly J. Trang, 59 year old resident of Pierz, MN went to be with the Lord on Tuesday, August 18, 2020 at his home in Pierz, MN. Funeral Service will be held at 11 AM on Saturday, August 22, 2020 at Faith Lutheran Church in Little Falls, MN,... View Obituary & Service Information

The family of Kelly J. Trang created this Life Tributes page to make it easy to share your memories.

Send flowers to the Trang family.